Their Side Of The Tracks

Most days, my commute takes me along an industrial stretch of East 141st Street that dead-ends at Park Avenue.

It is not, however, the Park Avenue that comes to most people's minds:  the one lined by canopied buildings to which well-dressed residents are escorted from taxis or limousines by white-gloved concierges.  Rather, it is the Park Avenue bound by the Metro North commuter railroad tracks after it crosses the Harlem River from Manhattan into the Bronx. 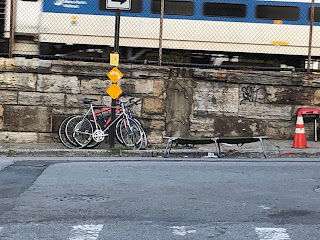 As I pedaled down 141st Street, I saw, those bicycles parked by the railroad tracks.

That, in itself, was unusual, as the few bikes one sees in the area are locked to light poles or sign posts.  But, in a move so cinematic it couldn't have been scripted, I turned to my right and saw this: 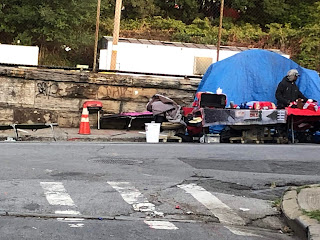 Those young men are living in that tent, by the tracks, and use the bikes to get around--just three blocks from the college.  At the end of a street where construction materials and chicken tenders are made.  Next to the tracks where trains, at that very moment, were ferrying commuters from Greenwich and Rye and Mount Kisco to Grand Central Station, where they would board subways and hail taxis to the places where they work and get paid. 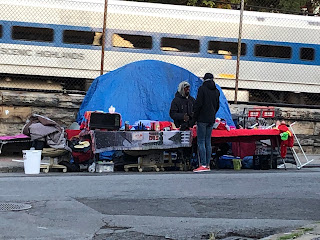 Most likely, none of the passengers saw the bikes, the tent--or the men who ride those bikes in search of food and bottles, cans and other castoffs to sell.

First of all, I want to thank all of you who sent your condolences and other thoughts over my mother's passing.

While pedaling to school this morning, I couldn't help but to think of her.  She was an early riser and often ambled by the canal behind her house. 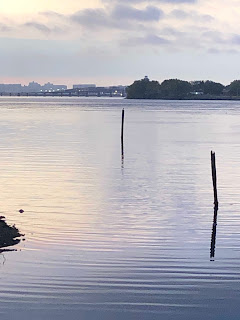 The Bronx Kill, which ebbs and swells under the Randall's Island Connector, is not nearly as bucolic as the waterway in her backyard.  I guess it was the calm, and the softness of the early morning light, that made me think of her, again.

Or perhaps it was another early riser: 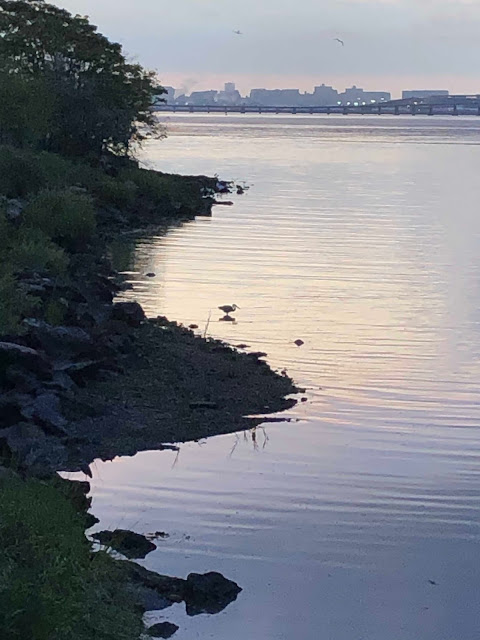 For the past couple of days, I've been in denial.  Yesterday, I took a ride to Connecticut on a beautiful late-summer Sunday.  Today it has rained.   I spent time with Mildred and did some work that engaged my hands and, occasionally, my mind. (It's somehow appropriate to Labor Day, isn't it?)  Among other things, I built a wheel and did some maintenance on Arielle, my Mercian Audax, and the Fuji.

There are other things I could do.  But I can't use them to escape because, at the moment, escape doesn't seem possible.

On Saturday night, just before midnight--and the change from August to September--my mother passed away.

She had health problems, mainly stemming from her diabetes, for a number of years.  Last Tuesday night, however, she woke, her skin clammy and her breathing labored.  My father brought her to the hospital and after diagnosing her, installed a pacemaker with a battery would be "good for ten years."

I talked to her on Thursday night.  She complained about one thing and another in the hospital.  Based on my admittedly--and thankfully-- limited experience with such facilities, I can't say I blamed her. (Hospitals really do have the worst beds!)  But she seemed in rather good spirits, given what she was experiencing.

On Friday, I called her cell phone.  She didn't answer, I thought that she might've gone home.  So I tried the landline.  Still no answer.  I tried each number again, later in the day and that night.  No response.

Finally, on Saturday morning, I heard from my brother in California.  Mom was heaving deep, guttural snores that seemed to come from deep within her body and, when my father tried to wake her, she didn't respond.

She was hooked to some machines.  The doctor and my father watched intently.  After what must have seemed like an eternity, the doctor said there was nothing more that could be done.

My mother had a DNR on file. (So do I.)  Still, my father said, giving consent to remove life support was the hardest decision he ever had to make.  I tried to reassure him that he was following Mom's wishes.  Most important, he probably spared her a lot of suffering:  Within minutes, she had no brain activity.

Dear readers, I am sorry if I am burdening you with onerous details.  What I had been trying to avoid is happening:  I am replaying the conversation and exchanges of texts about something I was absolutely powerless to change.  My father, my brother, Millie and others I've talked to have reassured me that the fact I wasn't in that hospital was not a reason why she passed just before midnight on Saturday.  Even with her medical issues, none of us could have known how close she was to the end of her life.  Perhaps she knew; if she did, she didn't let on.

Anyway, I am writing this because I have posted every day for the past five years and most days for about four years before that.  I might not post for a while, but I am not abandoning this blog.  If nothing else, though she saw only a few posts (She never learned how to use a computer; she saw things online only when my father showed them to her), I think she'd want me to continue:  She knew how important cycling and writing are to me.  They've helped me, as she did, through some difficult times in my life.  I don't think that will change.
at September 02, 2019 10 comments:

Nothing To Lose But Our Chains

Today is Labor Day in the US.  Some leftist historians and economists invoke the spectre of Karl Marx, although he had nothing to do with creating the holiday.  He died a decade before it was first observed, and several years before the first International Workers' Day, a.k.a. May Day.

Still, his name is invoked by some, mainly on the left, who see the erosion of workers' and unions' power in the globalized economy.  And, one of his most famous rallying cries is used to promote all sorts of events that have little, if anything, to do with honoring the contributions of working people:

Preparing For The Season

Whether you think Labor Day or the Autumnal Equinox signals the season's end, it's still Summer, at least for today.

But, since Fall is rapidly approaching, I find myself thinking about cycling through falling temperatures, not to mention rain and possibly snow.  When people ask how I keep warm, I say, "Dress in layers and keep pedaling."

Perhaps there are other ways: 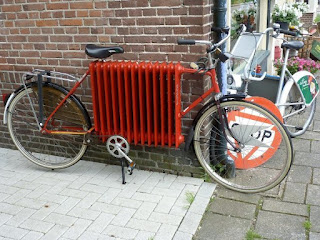