A Century After The Storm

I'd forgotten about Daylight Savings Time. So that, of course, meant I'd slept an hour later than I thought.

Then I realized I'd have another hour of daylight at the end of yesterday.  Plus, something about yesterday's noon light seemed very appealing.  What I didn't realize, then, was that it reflected some light I would see later in the day.

I also thought that going for a daylong ride (or, at least one of more than a couple of hours) would help to shake me out of the emotional funk and physical lethargy that enveloped me.  I was, as they say, sick and tired of being sick and tired.

So--you guessed it--I got on my bike.  I think Max and Marley knew I was going to be gone for a while because I left extra servings of food and water for them.

Anyway, I took out Tosca, figuring that if I rode for only two hours or so, I'd at least get a good workout.  That's one reason I recommend having a fixed-gear bike:  If you're pressed for time, you can still get in a pretty vigorous ride.

I started in the direction of Rockaway Beach.  I hadn't been there since the first Sunday of January.  It was a little more than two months since Superstorm Sandy; the streets still looked like sections of the Ho Chi Minh trail after the bombings and people still seemed shell-shocked.  I'd heard that there was still much devastation, but I was determined to ride out that way.

Well, as the day was breezy and chilly, but still quite pleasant, after crossing the bridge into the Rockaways, I wanted to keep on riding.  And so I did--alongside the sections of the boardwalk the storm tore away, past stores that still haven't opened and houses still vacant.  But some people, at least, seemed to be taking Sunday afternoon walks and otherwise taking back what they'd owned in their lives.  That may have been the reason why I just wanted to keep on riding.

And I kept on riding, until I got to Point Lookout.

That meant I'd already done the second-longest ride I've done so far this year, and the third-longest since Sandy.  I felt invigorated, to say the least:  I pedaled into a breeze-bordering-on-a-wind most of the way out.

You'll notice that Tosca is standing aslant.  She's not "posing"; it was the only way I could stand her up.  As I expected, the tides had tossed rocks and slates into positions in which no one had seen them before.  And there was a lot of erosion: 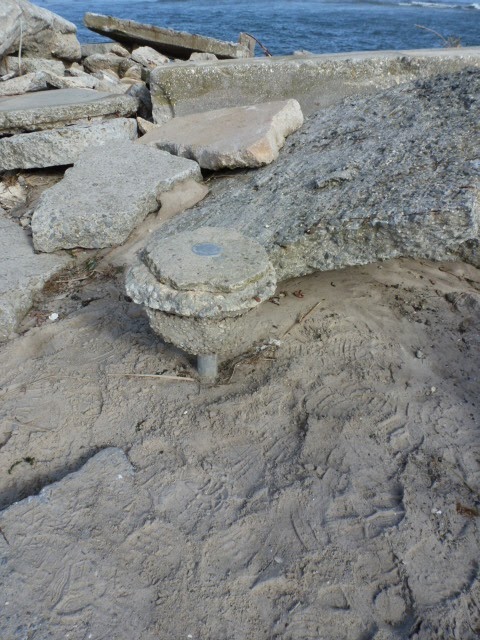 That mushroom-shaped thing is an Army Corps of Engineers marker.  In the two decades or so in which I've been riding to Point Lookout, it was always level with the ground and usually dusted with sand.

The bay loooked as it usually does, if a bit more forlorn: 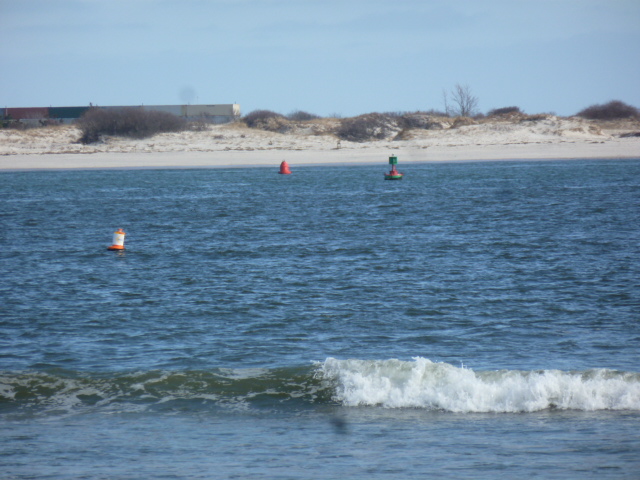 I know they're buoys, but a part of me wondered whether they weren't markers for something lost during the storm. 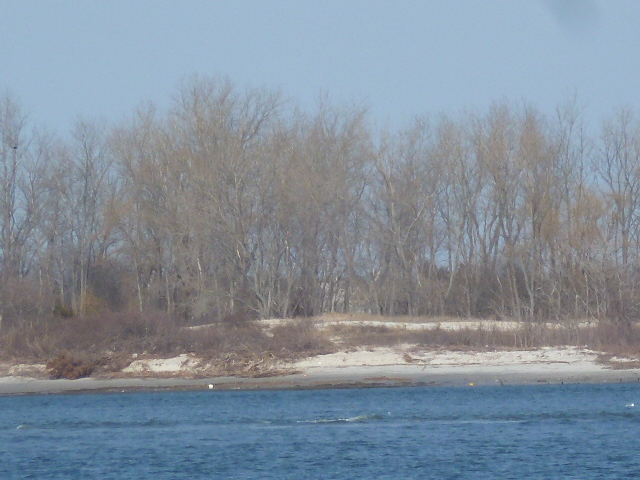 I also couldn't help but to wonder whether those trees were denuded by the season or the storm.  After all, it happened in late October, right about the time leaves attain, or start to pass, the peak of their autumnal color in these parts.

Even in the middle of such musings, I didn't feel sad.  After all, everything and everybody I'd seen during my ride was a survivor.  Plus, the light wind into which I'd pedaled would blow at my back as I started my return ride.  I felt stronger,and the ride seemed quicker.

And, by the time I got to Far Rockaway, the sea and sky refracted a layer of visual frost through the late-afternoon sun. 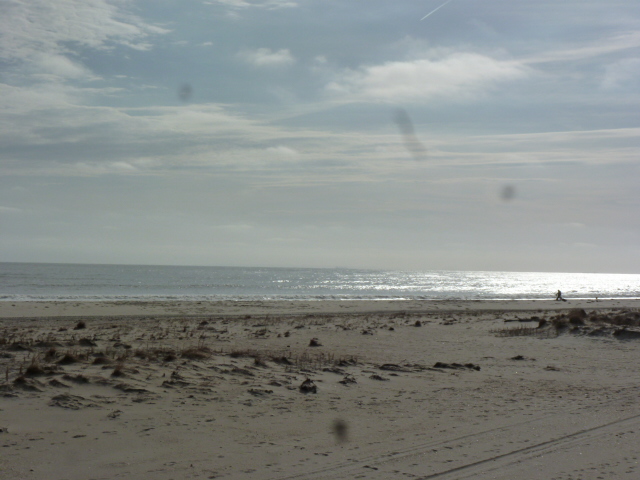 It was, I realized, a later-day image of what I'd seen when I left my apartment just after noon.