Something Else That Isn't New, And Something That's Even Better

So...You think Shimano introduced the low-profile cantilever brake as part of its then-new XTR mountain bike group of components in 1992.

Well, when I first saw those XTR low-profile brakes, I had my suspicions.  Like most Shimano "innovations", some other company had tried it before.  Some, like the dual-pivot brakes by GB, Altenberger and Weinmann, didn't work very well, and Shimano was the first component manufacturer to make it work.  Others, like indexed derailleur shifting and hubs with integrated cassette bodies, were successful in earlier iterations (in both cases, from SunTour), but the cycling public wasn't--for various reasons--ready for them.

So...It probably wouldn't surprise you to learn that Shimano didn't invent the low-profile cantilever brake after all: 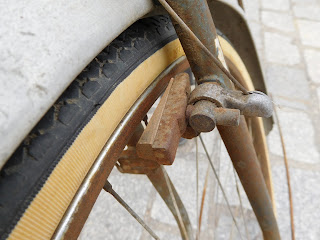 I don't know when this brake was made.  I'm guessing that they came as original equipment on the bike and, from what else I saw on the bike--a Motobecane city or utility bike--it was made in the 1960s, or even earlier.  Perhaps the brakes were made by one of the familiar but now-extinct manufacturers like Mafac, CLB or Weinmann.  Or they might have been made by some other company that went out of business even earlier than those firms. 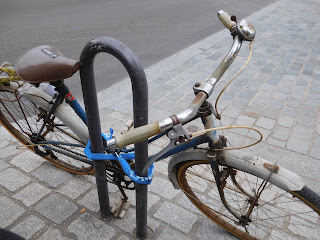 A sign announcing the bike was for sale hung from its top tubes.  The price was pretty low.  I thought about buying it, except that I don't have the time or resources to restore it.  Its owner might have ridden it for years without lubing (let alone replacing) the chain or cables, or cleaning and greasing the bearings.  But, as you know from reading this, that's something I would never do if I could help it.

Also, the logistics of getting the bike to my place would have been difficult, to say the least, for reasons I will reveal in a future post (possibly tomorrow).

In the meantime, I'll leave you with another interesting bike I saw today.  Given the way it was parked, I couldn't take better photos. 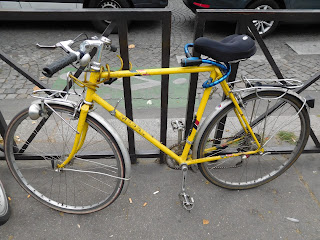 You know that at some point, this bike was owned by someone who rode a lot--and not just from the French Cycle Touring Society sticker on the fender. 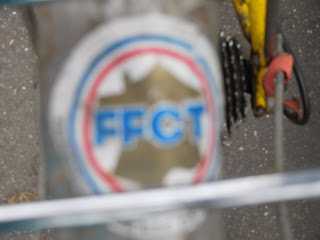 I'm guessing that the bike originally had dropped handlebars and, possibly, a Brooks or Ideale leather saddle.  Should we be upset that the bike now has flat bars and a thicker saddle?  Although I would have liked to see the bike in its "original" state, if the bars and seat are the thing that makes the bike a rider rather than a wall hanging, I won't complain.

The frame is made of Vitus 888--in its time, the chief European rival to Reynolds 531 and Columbus SL or SP. Also, the components are among the best of their time: 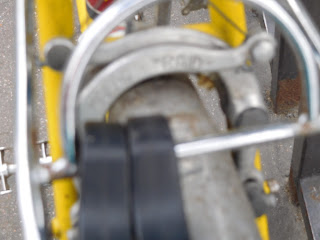 Now, you know the Specialities TA crankset, Huret Duopar derailleurs and Maxicar hubs spell "top of the line touring bike."  But this bike's owner (or builder) knew a thing or two:  the front sported a Mafac Racer brake, but the rear featured a Mafac Raid.  (Can't you just see and hear the bated breath and Velo Orange and Compass Cycles?)  And those pedals, from Specialites TA:  possibly the finest quill pedals ever made.

My favorite feature, though, is this: 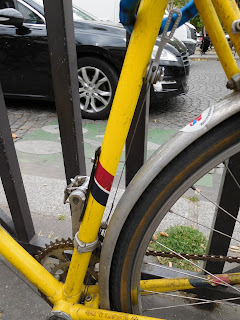 No, it's not a funky shifter for a front derailleur.  Instead, the lever operates this: 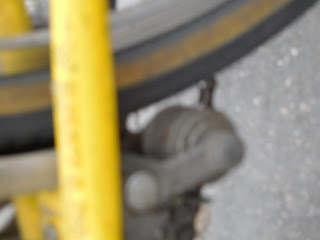 Some cyclists believed that when Sanyo chainstay-mounted dynamos were made (in the 1980s), they were the best available. I never used one myself, but I knew a few cyclists who did.  All claimed the generator was more efficient than any other available at the time--as long as the tire wasn't knobby or slicked by snow, ice, mud or oily rainwater.

Whatever you want to say, Meral bicycles reflected a lot of attention to detail.  It's too bad we didn't see more of them in the US.

(Yes, that last sentence is a clue as to why I decided not to buy the Motobecane with the low-profile cantilever brakes!)