As I mentioned in an earlier post, I sold Helene--the sloped top-tube Miss Mercian I stopped riding after I found Vera, my green Miss Mercian with twin-parallel top tubes.

Of course I felt sad:  She is beautiful and gave a more responsive ride than most "ladies'" bikes.  But I thought she deserved to be with someone who will appreciate her aesthetics as much as I did but would ride her more.

Also, as I mentioned, I have just bought a Mercian Vincitore Special, which according to Mercian's timetables, should be ready in March--which is fine, because it will be a gift to myself for a round-number birthday I will celebrate that July.  Of course, the money I got for Helene doesn't come close to paying for the Vincitore.  But I was able to strip  Helene for some parts I will use on the Vincitore. 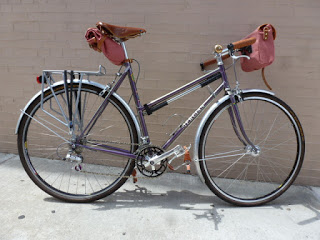 And, I tell myself, she's in a better place now. (Wait, that's not what I meant.)  Well, she is in a more exotic place, with someone who has promised to both treasure and ride her.

Although I'm not remorseful, I'm shedding an extra tear or two after receiving this:

I have had a horrible time but I feel safe again now but I have strange feelings and memories of when I was first made, could it be the voices and the cool weather? There is a nice lady who tells me she will look after me now and be my new Ms tress… She read me some thing she said that you wrote about why I am here. There have been worries about not being your favourite ever since that classy older girl came into your life, how could I ever compete? There were many lonely days hanging about hoping for a good long ride out in the fresh air but it was not to be.

When you started to take parts off me I first thought that I was going to be made smarter and more desirable then suddenly I was wrapped up in the dark, being shaken about and not knowing what was going to happen to me. Then my new Ms tress told me that I was held to ransom and kept for five more days waiting before being brought to my new home. My new Ms tress said that you must still love me quite a lot because you packed me up so carefully and made me very cosy for my journey, she loves the little present which you slipped in with me.

Wherever this is it is very nice, not as tidy as your home but here I can go out in the garden and be in the sunshine. There are some other bikes which live here with me, not from the same family as they were with you but an interesting mix. They are all a lot older than me, one is very smart, all black and silver with shiny new wheels, very elegant, she does not seem to have a name. There is a red and creamy white racy looking runabout called Viking who says that she could lend me her wheels until I find some new ones of my own. A small wheeled folding Dahon like the one I have heard you say was horrible has offered to let me have her springy Brooks saddle, she is close friends with an even smaller wheeled and much older maroon Moulton who wishes she could fold too but can’t. Upstairs where I have not been there are two others which are not completely working at the moment, I hope they are not jealous because I have heard that I shall be back on the road long before them.

It is so quiet here, most of the noise is birds flying about looking for food for their screeching chicks. They do not have cats in the house here but many sneak through the garden trying to catch the birds, I wish I had a bell to warn them.

The one thing which confuses me is that my new Ms tress tells me that I am really a Ms Mercian and my name is Justine! This could all be a strange dream but really I think I want it all to be true.

I forget who said that forgiveness is the aroma the flower gives off when you crush it.  Somehow, I think that fits Helene very well!