What Will They Accomplish By Cracking Down On The "Chop Shops"?

At least a few of my rides have included stops at flea markets.

So why are they called "flea markets"?

Well, it's a translation of "marche aux puces", the name given to an outdoor bazaar at the Porte de Clignancourt, on Paris' northern edge.  It's been operating there since some time around 1880.

So why is it called the "marche aux puces"?  It was often said--sometimes, with justification--that items, particularly upholstery, sold there were infested with fleas.

Not long before the market began to operate, the straight, wide boulevards lined with sandstone-colored buildings one sees all over the City of Light were first constructed.  To make way for them, old buildings on narrow, winding streets were demolished.  This left a residue of old furniture and other items out in the open, where they could have been infested with vermin.

There is another reason why people might have thought those items were infested with fleas:  The folks who salvaged them were, as often as not, themselves infested.  Not surprisingly, when Georges-Eugene, Baron Haussmann, executed Napoleon III's vision for modernising Paris, it left many Parisians homeless or simply destitute.*  During the city's transitional period, many such people had few, if any, other ways to generate income.

Homeless people all over the world continue to "pick up the pieces", if you will, all over the world.  In my hometown of New York, I have seen them selling everything from corsets to computers, from books to barbed wire.  And, of course, many pick up soda and beer bottles and cans, which they can recycle for 5 cents each, from trash bins. 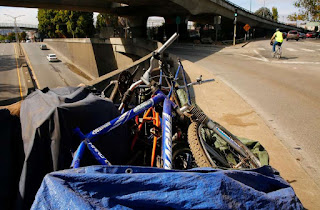 In San Francisco, that city of entrepreneurs, it seems that some of the homeless have become small-time operators in the bike business:  They operate what detractors call "chop shops" from underneath bridge and highway overpasses and other semi-enclosed public spaces.

While even homeless advocates admit that some of the bikes are stolen, the majority are the fruits of dumpster-diving, scavenging on the streets or barter.  Usually, the homeless or poor people who operate these pop-up bike shops fix up the bikes they sell or trade, or assemble bikes from parts found in various places or stripped from other bikes.

Most of the complaints the city receives regarding these operations are not about the shops, per se:  Most people don't have a problem with people doing whatever they have to do to put food in their mouths.  Rather, many residents say that these vagabond mechanics spread their wares across sidewalks, bike paths and sometimes even into streets, making it impossible or simply dangerous to navigate.

With that in mind, the city's Board of Supervisors is expected to pass a bill that would prohibit anyone from storing or selling the following on any public street, sidewalk or right-of-way:

The prohibition would not apply to anyone who has a commercial license (which, of course, includes almost no homeless person) or a permit for an event like a bike rally or clinic.  The bill gives the Public Works Department authority to seize items deemed to be in violation of the code. If the owner of the items doesn't allow the PWD to seize the items, police officers can be called in.  And, the owner can appeal to have the items returned 30 days after the seizure and notice of violation.

Not surprisingly, small business associations support this bill, mainly because the "chop shops" often impede access to stores, cafes and other establishments.  Bike shops are among such small businesses, and support the bill for the same reason.  Interestingly, though, none seems to have made an argument that these shops are taking business away from them because of their lower prices, probably because people who would buy (or barter for) bikes from "chop shops" weren't going to buy their bikes in a bike shop anyway.

Also not surprisingly, this bill is adamantly opposed by homeless advocates, civil liberties organizations and the Democratic Socialist party.  Most interesting of all, though, is a letter of opposition penned by Jeremy Pollock. He writes as a ten-year member of the San Francisco Bicycle Coalition who, as he says, has had bikes and parts stolen and recovered a "ghost bike" from a homeless encampment.

He effectively makes a point that the bill, should it become law, could violate the Fourth Amendment of the US Constitution.  He also decries the lack of collaboration between the city government and its citizens (especially cyclists) in drafting and voting on the bill.

Pollock also expresses concern that enforcing such a mandate could make the already-challenging  jobs of DPW workers who clear homeless encampments even more difficult by making already-strained relationships between those workers and the residents of homeless encampments even more tense and hostile.  This will put a further strain on the DPW's resources, and will stretch the police department and criminal justice system even thinner than it already is.

Oh, and if the San Francisco Police Department is stretched thinner, it will dedicate even less manpower and fewer resources than it does to combat bike theft.  As it is, the Department--like others across the country--simply doesn't regard bike theft as a priority.  And, if it wants to combat bike theft, according to Pollock, "we don't need this cumbersome new notice of violation, we need SFPD to focus on catching bike thieves!"

*To be fair, Haussmann's work also made it possible, for the first time, to navigate Paris with relative ease, which helped Paris to grow as a commercial as well as cultural center.  When he widened the streets, he also added sidewalks, which made Paris the walkable city it is today. Moreover, his plan included other public works, including sewers, which greatly improved sanitation and the health of people, as well as a series of public parks and gardens.

Then again, he also made it all but impossible to mount an insurrection in Paris by widening and straightening those streets that could previously be barricaded--or used as escape routes by people who knew them.
at October 04, 2017