You Can Take This Turtle On Your Next Trip

Chris Rock once defined camping as "white people pretending to be homeless."

Or, as a former coworker of mine once put it, "when you don't have room service."

Seriously, though, we have our own ideas about what it is and whether or not we've done, or would do, it.  During the course of bicycle tours, I have slept outdoors, with no shelter besides my sleeping bag:  sometimes under an open sky, other times under bridges and overpasses.  I have also slept in tents and tarps.  But I have never hauled a camper trailer behind my bike!

If you really want to pull a trailer, you can choose between ones with full-sized tents or bubbles that look like RVs designed for ET.  Now Austrian tent specialist GentleTent is offering something new:  a bicycle camping trailer with an inflatable tent.

Yes, you read that right:  inflatable.  The B-Turtle consists of an aluminum frame topped by an inflatable tent wrapped in a  PVC protective cover.  Inside the chassis is a 120 liter slide-out storage compartment for carrying additional gear.  That is also protected by a PVC cover. 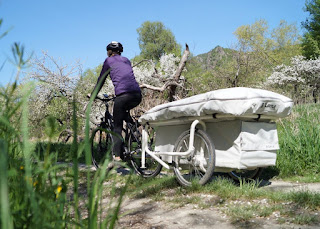 According to GentleTent, it can be set up in 10 to 20 minutes.  It can house two people, each of whom can sit, but not stand, comfortably.   While it's made for cyclists, GentleTent says it's meant for pedalecs (electric-assisted bikes) that max out at 25 KPH (15.5 MPH) or less. 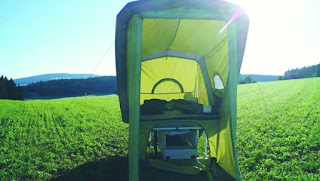