Every once in a while, I see a cyclist  (usually a male) "walking" his dog as he rides his bicycle.  Of course, the dog is one of the taller, longer-legged varieties like a retriever or hound.   The cyclist is pedaling slowly, if at all, and the trotting dog is tethered by a long leash to the cyclist's hand or handlebar.

A few times,  I've seen people (again, guys) walk their cats.  While the humans were enjoying their Sunday (Yes,  I always saw them on Sundays.) strolls in their local parks, the felines didn't seem to pleased.   It's not hard to understand why, given that cats have shorter, if more flexible, legs and most domestic cats aren't accustomed to the outdoors.  However, I wonder whether those cats notice the people who fawn over them.

I also wonder what they think of cyclists.  Most of us have been chased by at least one canine in our lives; in my early adolescence, it was something I came to expect when I was delivering newspapers on my Schwinn Continental at the northern end of the Jersey shore.  I think laws were less stringent in that time and place, so many owners let their dogs roam free.  Sometimes people assumed their beloved pets wouldn't leave the confines of their yards, most of which were unfenced.  And, of course, those same people insisted their dogs "won't bite."  That ranks right up there with a doctor intoning, "This won't hurt!" when he (When I was a kid, all the doctors were male.) was about to jab a kid with a needle--or almost anything a young man promises not to do when he's trying to convince a young woman to take off her panties.  Or, for that matter, any politician making a promise during an election season.

But I digress (again!).  Whenever I pedal along a side road (or street), I can't help but to notice animals, however domesticated they may be.  I am particularly fascinated by the game of peek-a-boo they seem to play when they poke their faces from behind cars, light poles or corners: 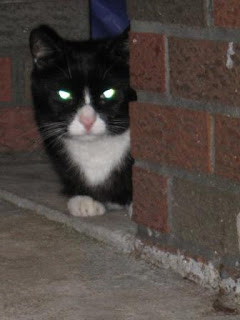 I saw this one on my way home from work the other evening.
The funny thing about cats like this one is that they're fascinated by cyclists until we get within two feet or so of them.  Then they scamper away from us and, after running and leaping up a curb, they glance back toward us.
I wonder what they're thinking.  And I wonder what Charlie and Max think as I leave with one of my bikes
at September 21, 2010