With The Light Of This Day

Today the temperature went over 40F.  Yesterday it came close to that.  For the first time this year, we've had consecutive days on which the temperature rose above freezing.

As a result, all of the ice and much of the snow that had accumulated since Christmas were gone.  So I rode to and from work for the first time this week.  It might be the last time, too, as the temperature is supposed to drop by twenty degrees tomorrow and we're supposed to get another snowstorm.

Last week, one of the office assistants asked how I rode to work.  I had to think fairly hard.  I actually have three or four distinct routes, and a couple of permutations of each one.  I don't think much about which way I'm going;  somehow I just know where to turn.  In a similar fashion, lots of passengers know, without seeing any signs or hearing any announcement, when the train is pulling into their station.  Sometimes the passengers don't even have to see the station, or anything around it.

What guides them to disembark at the right stop?  Is it some sort of internal clock?  Or some other cue?
To tell you the truth, sometimes I'm just navigating by nothing more than light.  Somehow the glare of signals and the way in which the day's light fades--or grows brighter--is enough for me to know which way to go.  Sometimes. 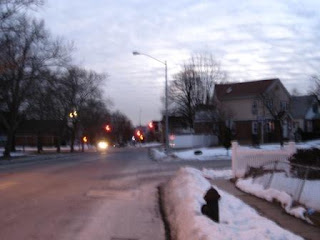