In The Saddle Again, With Or Without Yogurt 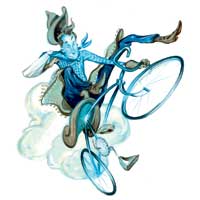 Oddly, I think that might have been the reason why I didn't feel any pain in my knee.  Riding fixed forces you to spin at a more or less even pace; sudden power surges are difficult and even dangerous, especially in traffic.  Now, my ride was flat, but still, I felt good about it.
Perhaps even odder, the pain I felt was around my lower back.  I'd been doing some excercises the physical therapist recommended for loosening up the muscles in my leg and hip.   Then again, those exercises had been about the extent of my physical activity until today's ride.  So, perhaps, my body still has to re-adjust to normal activity.
Well, I'm glad I got out, anyway:  It was a mild day for this time of year.  So my ride was pleasant, even under a threat of rain that didn't materialize until I got home.
However, there was one disappointment.  Along the way, I hoped to pick up some fresh Greek-style yogurt from Kesso Foods, which makes the stuff.  Alas, they were closed by the time I got there.  I knew they closed earlier on Saturday, but I didn't know how much earlier.  Oh, well.
Fage yogurt is nice, but Kesso's stuff is like creme fraiche by comparison.  Even people who dislike yogurt will eat Kesso's:  I think yogurt-haters dislike the slimy texture of other kinds of yogurts sold in stores.  Kesso's sells the stuff plain, or with various toppings.  (My favorite is their sour cherry with almond slivers or crushed walnuts.)  They also sell various Greek and other Mediterranean foods that you won't find in your local Pathmark or Safeway.
All right..enough about culture for now.  I did, as a celebration, treat myself to one of my favorite takeouts:  The King of Falafel and Shawarma.  Life is good, again.
P.S.  I'll soon have more posts about the bikes of  my past!
Today I took my first ride since going down last Thursday.  It was a short ride--only about seven miles.  But I did it on Tosca, my fixed-gear bike.
at February 18, 2012

Email ThisBlogThis!Share to TwitterShare to FacebookShare to Pinterest
Labels: Kesso Foods, King of Falafel and Shawarma