Maybe it had to do with the full moon we had last night.  On  my ride today, I saw some interesting and unusual bikes. 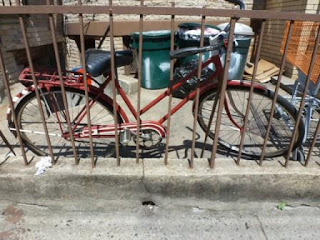 This one was parked not too far from my apartment.  From its joints and the style of the head badge, I am guessing that it's a Schwinn "Breeze" from the 1960's or early 1970's.  The "Breeze" was one of Schwinn's "lightweights" and was equipped with a single-speed coaster brake rear wheel. 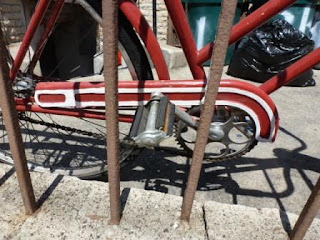 This chainguard is really interesting:  Some older Schwinns had "textured" guards rather than the flat ones found on later models.


Take a look at the "barbershop pole" stripe on the rear fender: 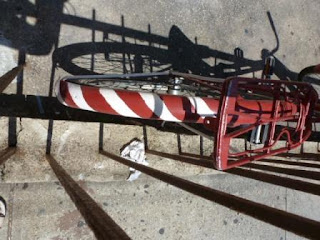 I like what the person(s) who repainted the bike did to the front fender, too.  However, I'm not sure that the front fender is the original, as I don't think the "Breeze" (or any other Schwinn, for that matter) ever came with a ribbed fender.  This one looks like it came from an old Raleigh (or other English) three-speed. 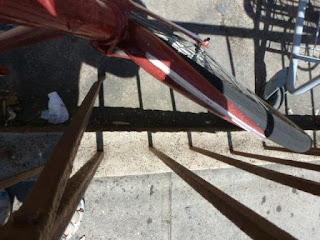 Contrast the Schwinn with this bike I saw parked along Kent Avenue, near the old Domino Sugar refinery,  in Williamsburg: 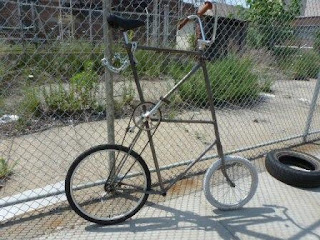 By now, you've probably seen similar "funny bikes," with one frame stacked on top of the other.  I couldn't help but to notice the relatively thin chain and lock used to secure the bike: 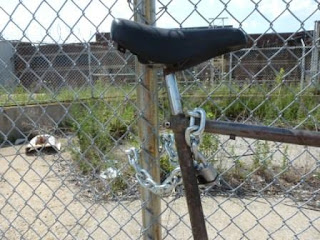 At first, I thought that perhaps the bike isn't such a target for thieves.  After all, most bike-nappers probably wouldn't know how to ride it and would therefore not get very far.  Back in the day, that was also the reason why you could leave a fixed-gear bike unlocked, at least for a short period of time:  A would-be thief was likely to break his legs when he tried to coast or slow down.

But I digress.  I think I saw the real reason why nobody would steal this bike: 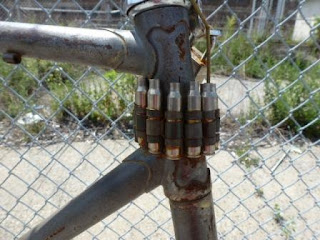 I did see one more interesting feature: 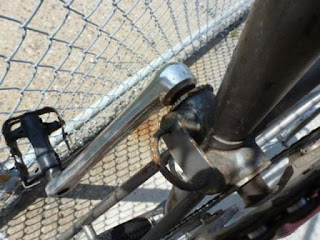 I guess it's a handle.  Unless you're as tall as the buildings on the other side of the East River, you couldn't "walk" or carry the bike by grasping the handlebars and saddle.

On the other hand, this bike is all about carrying things: 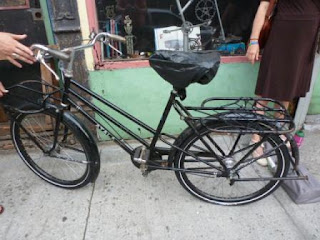 According to Liz of Bike Works NYC, it's a bike used by the Italian Post Office.  I don't know whether the bike was called "Il Postino," but I couldn't resist referring to it that way.  I mean, it's not hard to imagine the mail carrier in the eponymous film bringing letters from publishers and Nobel Prize committees to Pablo Neruda. 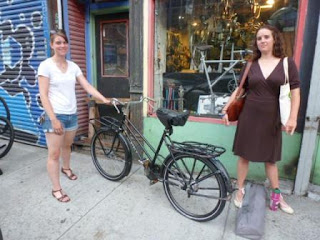 I'll tell you more about Liz (on left), her friend, Bike Works NYC and what I was doing there in a near-future post.