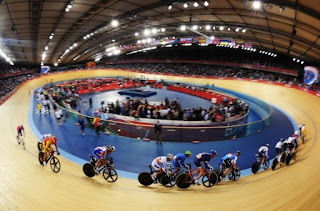 During the past week or so, I haven't posted much.  One reason is that I've been watching the Olympics.

For some reason, I'm more interested in them this year than I was the last time around (2008) or the time before that (2004).  It may have to do with my having spent some time in London and knowing  of some of the venues in which the Games are being held, as well as other landmarks.  It may also have to do with the fact that I've been home, whereas during the previous two Olympiads, I was away:  visiting old friends in France in 2004 and my parents in Florida (for the first time since I began my transition) in 2008. So, I guess, you could say I was occupied.

While I'm always glad to see cycling, I wish there were more coverage of it.  I guess the networks figured that there would be more interest in the road and track races and the time trial than in some of the other events.  I'm sure that a lot of casual cycling fans wanted to see the time trial because it was contested by, among others, Bradley Wiggins--whose victory in the Tour de France a week earlier was the first by a British rider--and his countryman and teammate/rival Christopher Froome.  And, a lot of Americans probably tuned into the road race because they thought Kristin Armstrong, who won a gold medal, was Lance's ex.

One event that seems to get almost no attention outside of the Olympics--and is unknown to nearly all Americans--is the omnium, in which Lasse Hansen of Denmark won the gold medal today.  (French cyclist Bryan Coquard won the silver and Britain's Edward Clancy took the bronze.)  One could think of it as the hepathlon of cycling, except that, instead of seven events, it has six:

Now, I can understand why most Americans have never heard of it:  It's a new sport in the Olympics and was added to the World Championships Program only five years ago.

It will be interesting to see whether the omnium will be part of future Olympiads.  Even bronze medal winner Clancy says that although it's "great entertainment" and was good for him personally, he feels that winning depends on luck more than it does for other events.  "I don't know whether this fits in with the 'higher, stronger, faster' ethos of the Olympics," he explained.

He may be right about the role luck plays in it.  Then again, the same could be said for nearly all sporting events:  How many winners and runners-up were decided by injuries, illnesses or even weather conditions? Or how many times have people gotten jobs, promotions and even the loves of their lives simply because they were--sometimes unwittingly--"in the right place at the right time?"  Heck, even my students' grades have been determined by factors beyond their--or my--control.