A Postie Bike In Brooklyn

Here's a bike we don't see every day, at least not in the US: 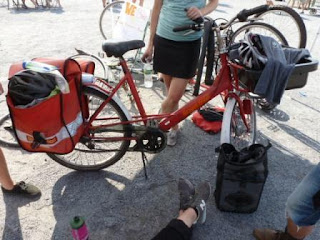 It's a Pashley Mailstar bike.  "Posties" all over the UK use them to deliver cards, letters, packages and whatever else can be sent through Her Majesty's service.

Liz, who rode it, bought it from a friend in South Africa.  It's come in very handy for her, as she has to lug a lot of equipment to various events, such as the one at which I saw this bike. The first time she rode it, she says, she found the riding and handling more responsive than she expected from such a bike.  That, from someone who rides classic road bikes and whose stable includes a Mercian.

It's not hard to imagine workers at the Olympics in London using this bike, or something much like it, to bring equipment to different venues of the Games.

I'll tell you more about that event tomorrow.  I'm getting sleepy:  a sure sign I didn't use enough sunscreen!
at August 11, 2012