A Reflection On My Treks Past

The bike I rode yesterday is the third Trek I've owned.

So, naturally, I got to thinking about the other two. 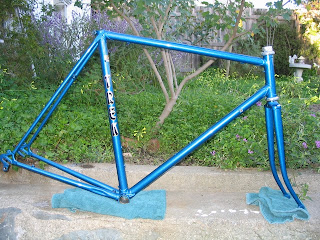 My first Trek was also the first "pure" racing bike I owned.  It might well have the tightest geometry of any road bike I've ever had.

The 930--which should not be confused with a singletrack mountain bike bearing the same numerical designation, which Trek offered during the 1990's--was a classic lugged bike constructed from Columbus SL tubing.  (The larger sizes used the slightly thicker-walled Columbus SP.)  The one in the photo is the same size as mine was:  a 56cm seat tube.  But, like other racing bikes of the time, it came with a top tube of the same size as the seat tube.  That meant I had to ride with a short-reach stem, which made the steering less than optimal.

But the bike could accelerate, thanks to its short chainstays and wheelbase.  Being young and full of testosterone (and other substances), I could blast that thing on the flats.  Oddly, though, it didn't climb quite as well as some other bikes I've had, including ones with longer wheelbases and chainstays.

And there is one other difference between my 930 and the one in the photo:  Mine was black.  However, it had the same style of lettering you see in the image, and, unlike some other Treks, didn't have a contrasting-color band.  I equipped it with a mixture of racing components, a tan Ideale 2002 saddle and red handlebar wrap and cable housings.

I bought the frame while I was working at Highland Park Cyclery. If I remember correctly, I took that frame in lieu of three or four days' pay.  Later, I acquired my second Trek in a similar way. 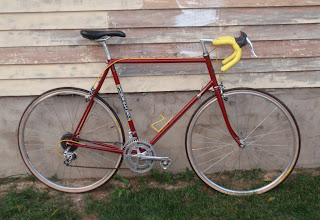 That frame, a 1982 Trek 510, became the bike I would ride on my second European tour, which took me from Rome and up the coast of Italy into France.  If you have, or have ridden, a Rivendell Rambouillet, you have an idea of what that bike was like.  In the 1970's and 1980's, a number of bike companies offered bikes like it, which were called "sport tourers."  As you might have guessed, their geometry wasn't as tight as that of a racing bike, but it didn't have the "lumber wagon" dimensions of many touring bikes.  It's the sort of bike you could take on a quick training ride, or to which you could attach a rack and panniers for a short or light tour.

The bike had a longer wheelbase and chainstays than the 930, although it was the same size.  Strangely, though, it had a top tube of the same length.  But I didn't mind riding a short-reach stem on the 510 as much as I did on the 930 because I often rode the 510 with a handlebar bag.

It was constructed of Ishiwata 022. I don't know whether Ishiwata tubing is still made, but a number of bike builders were building some nice frames from it.  Like Tange tubing, it was made in Japan and was a chrome-molybdenum steel.

My 510 came in the same colors--a burgundyish red with a silver/grey band on the seat post--at the one in the photo.  However, I didn't use yellow accessories:  My water bottle cage, like the rack I installed on it, was silver.  And I rode it with a tan leather saddle and brown leather handlebar tape--from Cannondale, I believe.

I actually got it after I'd "officially" stopped working at Highland Park.  However, Frank, the then-owner, let me work a couple of days to pay for it.  I think it was a "leftover" from the previous year that he wanted to move.