If You Can't Do Iditarod

Last month's running of Iditarod was said to be one of the most difficult and dangerous in the history of the annual race, maninly because a key section of the race was all but snowless.  So, instead of sliding along white trails, competitors rumbled and bumped along rocks and dry earth.

That was not a problem for Dan Burton of Saratoga Springs, Utah.  You see, he didn't compete in Iditarod.  However, made another journey that some of his famly members and friends thought was even more Idit-iotic than the race in Alaska.

In February, he became the first person to ride a bicyle from the coast of Antarctica to the South Pole.  Although large chunks of the continent's coastal ice shelf are breaking off and floating and melting away, Burton did not have to contend with rocky ground.  However, he had to pull himself out of a crevasse and be careful of all sorts of other hazards not easily seen in the ice and snow.

One thing that makes his journey truly remarkable is that he did it solo:  No team backed him up.  When his wheel needed repair, he fixed it by himself.  And he pulled all of his supplies--including the freeze-dried meals he cooked--in a sled behind his bike.

Speaking of meals:  Most of the time, he cooked in his tent, as it was more fuel-efficient.  And, yes, he slept in that tent every night of his trip.

In all, he says he covered 730 miles in 51 days of cycling, although he's not completely sure because he lost his GPS. Thirteen miles a day may not sound like much,  but it's quite a feat when one considers that he spent much of his time pedaling into headwinds and rode through temperatures of minus 30 degrees.  That's a bit worse than the coldest morning commute I ever had. 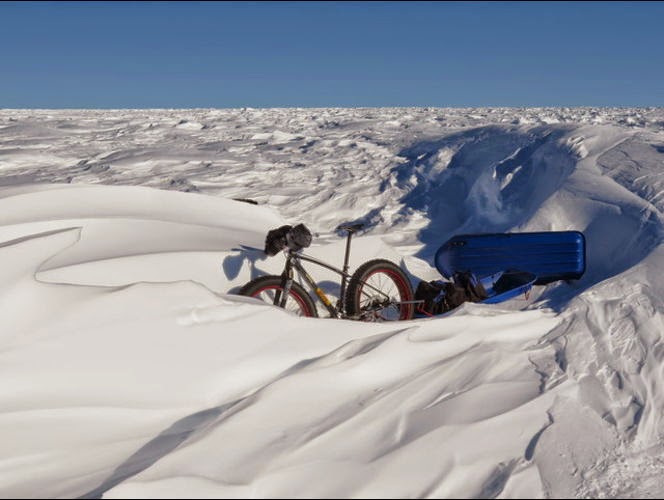 Let's hope the climate doesn't change so suddenly or dramatically that Burton is the only one to cycle across Antarctica to the South Pole.  I think he's happy with the distinction of being the first.