How And Why A Cyclist Struck A Pedestrian In Central Park 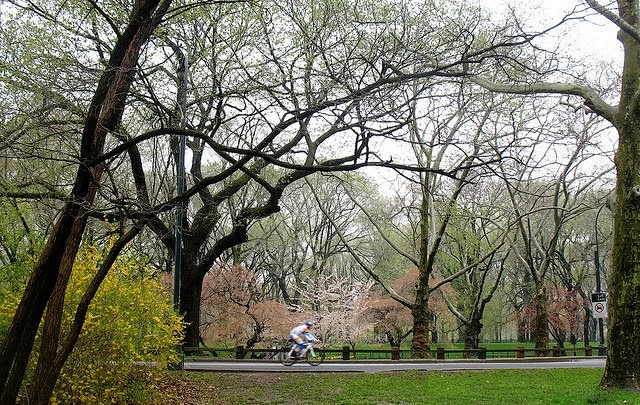 Perhaps that makes me a jaded, cynical New Yorker—you know, the kind who think “only tourists” go to the Statue of Liberty, take in a Rockettes show or go to the Village and expect to see musicians, artists and writers living “bohemian” lives.

To tell you the truth, I’ve never been to the Statue or Radio City Music Hall.  And I can’t remember the last time I walked around in the Village.

I also don’t go into the Park very often for any reason.  Don’t get me wrong: It’s a lovely place, a masterpiece of urban landscape architecture.  And a couple of laps in it can give you a good mini-workout.

Something that happened yesterday reminded of why I so seldom pedal into, or around, the Park.  A 31-year-old man was riding at a good clip when a woman nearly twice his age crossed into the lane.  He shouted for her to get out of the way.  Neither he nor she had time to get out of each other’s paths.  Even if they had, they probably wouldn’t have had any room to maneuver:  On a clear, mild day, the bike lanes are full of cyclists of all kinds:  racers, wannabes, other athletes-in-training on bikes, those who are riding to unwind, the ones (usually tourists on rental bikes) who want to take in the sun and a leaf-fluttering breeze with the skyline as their backdrop and those who want to be seen in the latest team kit and the most expensive bike they could find.

In other words, the bike lanes are clogged with cyclists of varying abilities, pedaling at various speeds and with even more disparate levels of awareness of their surroundings.

Even the least alert cyclist is probably paying more attention than some people who are strolling across the meadows and around the lake.  I don’t mean to impugn all pedestrians in the park; I am simply saying that those on foot—especially tourists—are more likely to let their guard down while walking through the park than cyclists are while rounding the turns.

That is not to say that neither the woman who was struck—or, for that matter, the cyclist—is to blame.  Rather, the incident should serve as a cautionary tale for everyone who goes to the Park.   That is also not to say the Park can’t be enjoyed by all: Those who ride, walk, run, skate, skateboard or otherwise venture into, around or through the park simply need to act more or less as if they all were motor vehicles on the streets.

As for me, I probably won’t be riding in Central Park any time soon because it’s become so crowded.  I actually feel as though I have more space on most streets.  And the traffic is more predictable.

The woman--Jill Tarlov of Fairfield, Connecticut--has been declared brain-dead.  The cyclist--identified as Jason Marshall--has not been charged, though the NYPD says they're still investigating the incident.