It's All About The Spectacle--And Food!

Sometimes sporting events aren't only about the event itself.  Rather, the event becomes a platform for all sorts of communal rituals and spectacles, if not outright marketing.

The Super Bowl, which will be played tonight, is the perfect example of that. Two out of every three Americans, according to one poll, plan to watch the game. Of them, 45 percent don't care which team wins.

Part of the reason why so many people have no interest in the outcome of the game is that they don't have a rooting interest in either the Denver Broncos or Carolina Panthers,the two teams that are contesting the match.  Another, possibly more important, reason is that many will not be watching the game as football fans:  They are attending or hosting Super Bowl parties in their or friends or family members' homes, or in sports bars. 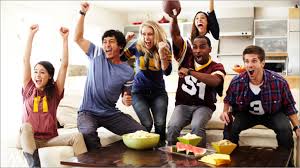 Really, the Super Bowl has become like another holiday that is an excuse to get together with friends and/or family to eat, drink and let loose.  Just as the American holiday of Thanksgiving has such traditional foods as turkey with stuffing and pumpkin pie, Super Bowl Sunday is associated with chicken wings (barbecue or Buffalo style), pizza, tortilla chips with guacamole and beer.

Also, plenty of people will watch the game to see the halftime shows and, most of all, new commercials that will debut.  On one hand, it's distressing to think that some of the greatest and most creative minds in this country are employed to sell colored sugar water and cars that will be in landfills long before they are paid for.  On the other hand, the commercials can be fun to watch because they are imaginative and sometimes whimsical or, on occasion, beautiful.

So why am I talking about the Super Bowl Spectacle on a bike blog?  Well, I am reminded of the hoopla surrounding the stages of the Tour de France I attended (including the finish of the 1980 edition).  People camp out along the route and spend the day cooking and consuming all sorts of foods and, of course, drinking.  They play music, some dance; everyone is in a good mood.  Before the peloton whizzes through, caravans of Tour and team sponsors' vehicles roll by with various floats in tow.  Music streams from those vehicles; some tow stages on which musicians and dancers perform, or screens that flash scnes from the previous day's stage of the race.  And, from those trucks, vans and cars, drivers and passengers toss all manner of schwag to spectators:  keychains, mini-dolls and such with teams' and sponsors' names on them; one even threw packets of Mini-Babybel cheese nuggets!

Ah, yes--It's always about the food, isn't it?   Just like it was on a bike ride the Central Jersey Bike club used to run on winter Sundays (including Super Bowl Sunday) to a rural firehouse.  The ride itself was pleasant and calming, though not challenging, even for those riders who were in their mid-winter doldrums: about 50 or 60 kilometers round-trip, as I recall, through flat countryside.

The real "event", if you will, was going to the firehouse, where they had all-you-can-eat pancake breakfasts for three dollars, if memory serves.  You could also have all of the coffee, tea, orange juice, scrambled eggs bacon, sausage or ham or hash browns you wanted. Being young and poor, I was usually hungry, even before riding, so that breakfast, I mean ride, appealed to me. 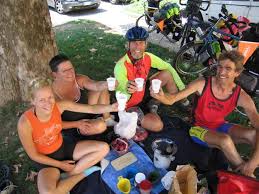 I'm sure other club members, as well as many of the local people who went for the breakfast, were also there to fill themselves up for not very much money.  But for them, and for us, it was a social event as well:  We talked, we gossiped; some of us boasted and made challenges, but we came together for a comforting meal on a cold day.  Then we got on our bikes and rode back to Highland Park, just as the locals got in their cars and went home.   They--and we--would return for the next pancake breakfast in the firehouse, just as many people will, today, return to familiar haunts with familiar faces and consume familiar foods and drinks, the Super Bowl on a screen as their background.