Following Bliss At The Beginning Of Fall (Apologies to Joseph Campbell)

Fall began the other day, though you wouldn't have known it from the weather.  Today was more like it:  cool and breezy, with bright sunshine showing, like the leaves, just the slightest hints of change in hue.

This also means the days are growing shorter.  So, if you want to ride the same number of miles or kilometers you were riding a few weeks earlier--in daylight--you have to leave earlier in the morning.  Or ride faster.

Today I woke up later than I anticipated.  Still, I decided to sit and enjoy a breakfast you won't find at very many training tables.  I blame the nice, warm baguettes I encountered in the bakery two blocks from my apartment.  (Well, now you know one reason why I'm not as skinny as I was!)  And I just happened to have a nice, ripe slice of Brie in my refrigerator. I took it out before I set out for the bakery.  When I got back, it hadn't started to run, but oozed flavor nonetheless.

Perhaps incongruously, I washed everything down with green tea.  I find, increasingly, that it's what I prefer to drink before a ride, especially since I've started to keep un-bagged tea (from Japan, no less) and an infuser in my apartment.  I'm going to keep those things in my office, too!

(Of course, while in Paris, I drank coffee before rides.  Why wouldn't I?  Who goes there to drink tea?) 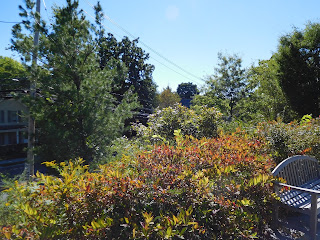 Yesterday the weather forecasters told us that last night we would have rain and wind, which would bring in the weather we had today--which began with a heavy cloud cover that broke up through the morning.  Hearing that prediction, I planned on taking a ride to Connecticut.  But I wondered how realistic that plan would be, at least if I wanted to get home in daylight.  After all, it was nearly noon when I got on my bike.

And I started my ride in the teeth of a 30KPH wind. I realized that, if I wanted to return home in daylight, I had three choices:  push myself, ride to Connecticut and, if need be, take the train home from there or some other point on the way back, or just ride as far as I could in a couple of hours and turn back, whether or not I reached Greenwich.

Just about all the way up, I was pedaling into that wind.  But the ride wasn't as strenuous as I expected.  Perhaps it had something to do with the weather:  temperatures of 12 to 17 C (55 to 64 F) with muted but gradually brightening sunshine.  Also, I was riding Arielle, my Mercian Audax, which always seems to make me faster,  without trying.  And, hey, I was just feeling so, so good simply to be out riding! 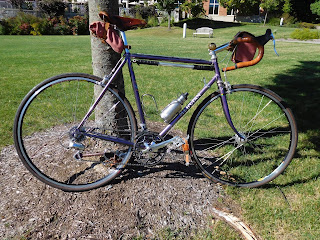 Even though I took the long route up--which also happens to be the route with more hills--I got to Greenwich more quickly than I expected:  about two hours and forty-five minutes.  That meant about three and a half hours to sunset.  And I would have the wind at my back!

Mind you, I wasn't trying to better a personal record (I didn't) or prove anything to myself.  I simply felt so good today that I couldn't help but to have a great ride.  And, of course, Arielle gives such a smooth ride that I can keep on pedaling without pain, without strain and still get a good workout.

Oh...When I got home, I still had a bit more than half an hour to spare before the sun would begin to set, having pedaled 140 kilometers--and lounged for about half an hour in the public garden by Greenwich Hospital.  Most important, though, I felt so, so good!

Email ThisBlogThis!Share to TwitterShare to FacebookShare to Pinterest
Labels: Arielle, bicycling at the beginning of fall, bicycling in Connecticut, bliss, Greenwich Common, Mercian Audax, perfect day, perfect day to ride, why I ride my bicycle