I don't have a tradition of riding on New Year's Day.  I like to start my year that way, but it hasn't always been possible.  There were New Year's Days on which I was in one place but my bike(s) were someplace else.  Or, I woke up late or hungover, or there was snow or ice on the road.  And then there were the times I couldn't get myself out of bed.  I blame those who were in bed with me for that!

Anyway, today I woke up late, but felt fairly good.  The weather wasn't terribly cold, but it was windy (30MPH/50KPH gusts).  The forecasters said the wind would die down later in the day.  So I spent some time calling friends and family members, and doing a little work on my latest project.

Then, in the middle of the afternoon, I got out for an easy ride.  Parts of it, at one time, were part of my commute.  It includes a few short climbs that aren't really steep but can seem so if you had to stop for a traffic light or two, and therefore didn't build any momentum, before climbing.  Or if you're riding a single-speed, as I did yesterday.  Not Tosca, my Mercian fixie.  Instead, I took the LeTour, which has one gear.

I wound along some side streets in my neighborhood--Astoria--toward the East River, in the hope of seeing the whale that wandered into it.  No such luck:  Either it had wandered back out or was hiding in the depths.  At least, that's what I hope.

(By the way, the East River, which separates Brooklyn and Queens from Manhattan, is not a river. It's really a tidal estuary.  It was called a river because of a mapmaker's error.)

Anyway, I followed the bike lane along 20th Avenue toward LaGuardia Airport.  Just to the east of the terminals, I picked up the World's Fair Promenade along Flushing Bay and pedaled through Flushing to the North Shore.

I guess I shouldn't have been surprised that the streets, no matter where I rode, were nearly deserted:  Not only was it New Year's Day, it was Sunday.  And, although it was fairly mild, at least for this time of year (45F/8C) and the sun made an appearance, the weather didn't seem to entice many people to go outside.

One thing I love about cycling is that I can ride through an area I've ridden many times before and, by taking a turn, discover something new. 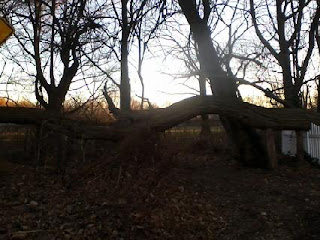 I came upon this "entrance" to a park at the end of a street in Bayside, near St. Mary's Hospital.  I was ready to duck under that tree and, maybe ride on a dirt path or two--until I got closer and saw the fence behind it. 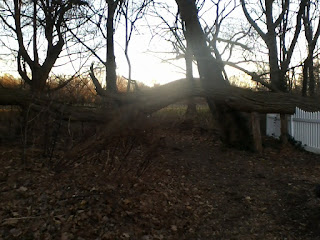 Actually, the entrance is on the other end of the park--not far away, but not as much of an adventure as entering under a tree!

I couldn't complain, though, about the way my first ride, on the first day of the year, ended: 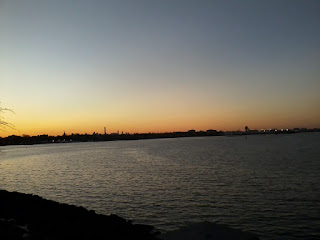