How might the world be a different place if Henry Ford had said that a customer could have a Model T "in any color so long as it is plum"?

Better yet...What if he'd offered a bicycle in that one shade?  He did, after all, repair, design and manufacture bicycles before he turned his attention to automobiles.

The closest we may come to answering the answer to those questions comes in the form of RE:CYCLE, a bike just developed by the Swedish start-up firm Velosophy. 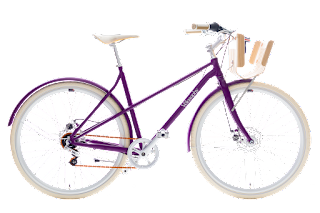 So how did plum purple (which, as you've probably guessed, I love) come to be the one and only color  you can choose for your RE:CYCLE?

Well, it just happens to be the color of the Nespresso Arpeggio pod.  Turns out that Nespresso, a Nestle-owned company, has been trying to encourage the recycling of its pods, which are made of aluminum.  Turns out, the metal can be melted down and recycled almost indefinitely, so today's Nespresso pod or Coke can can be tomorrow's Swiss Army knife bodies, fancy pen or--you guessed it--bicycle frame.  As Jimmy Ostholm, the brainchild behind RE:CYCLE, says, finding a way to convert the lightweight aluminum into a material rigid enough to meet bicycle maunufacturing safety standards "isn't rocket science."  The problem, it seems, is to get consumers to embrace the idea of re-purposing the containers that brought them their "morning Joe." 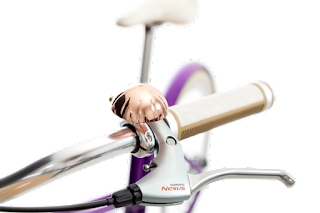 The bicycle's color isn't the only clue as to its origins.  The bell is shaped like a Nespresso pod, and the front carrier has straps to hold a take-out coffee cup. 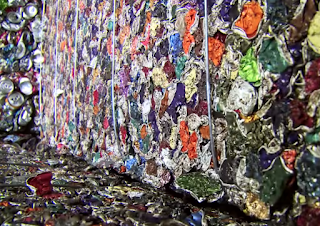 In case you're wondering:  It takes 300 of those Arpeggio pods to make one RE:CYCLE frame.  Oh, and it takes about 150 years for one of those capsules to decompose in a landfill.  It can be argued that we'd be better off if we didn't have single-use containers in the first place. (In 2016, Hamburg, Germany became the first city to ban all types of single-use coffee pods in its government offices.)  But given the numbers I've just mentioned, the RE:CYCLE, while not the solution to all of our waste problems, is an example of how we can move toward  more circular, sustainable ways of consumption.