After A Century—Airbags For Cyclists?

The first US-made automobiles with airbags were introduced in the mid-1970s.  The pneumatic restraints became common about two decades later and mandatory in 1998. However, the innovation is just over a century old: In 1919, Harold Round and Arthur Parrott of Birmingham, England filed a patent, which was approved the following year, in the United States.
(Interestingly, the airbag’s inventors were dentists. If they’d marketed their device, it would’ve made a fun ad slogan:  The Round Parrott takes the bite out of crashes!)
It took another three decades, however, for someone to patent a version for use in automobiles. John W. Hetrick, an industrial engineer, came up with the idea of a bag that would inflate on bumper impact after working on Navy torpedoes. Unfortunately, he became one of many who didn’t profit from his work:  No auto company wanted to finance it, and his patent expired just before Ford installed it on a few experimental cars.
That leads me to wonder whether the product I’m about to describe had a similar fate. Evoc Sports of Germany has just introduced its Commute Air Pro 18. 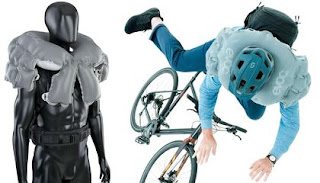 It’s a set of football-style shoulder pads designed to inflate within 0.02 seconds after an impact is detected. They are intended to protect a cyclist’s neck, shoulders, chest and collarbone—the last of which is the site of frequent and painful injuries. The sensor is activated by an electronic magnetic buckle on the waistband. It can be unbuckled so that the rider can bend over (say, to pick up his or her bike) without deploying the airbags. The bags themselves are re-usable but, after they are inflated, the CO2 cartridge will need replacement.
The device is contained in a backpack that has enough room for a laptop and more. When it reaches the market next year, it’s expected to go for 900 Euros (about $1065 at current rates). I hope that a.) the price comes down, b.) it’s as effective at preventing injuries as it’s claimed to be and c.) its inventor benefits more from it than John Hetrick did from automotive air bags.
at September 14, 2021