If the Lord was the shepherd of some old Hebrew poet, then my navigator, at least for today, was this fella: 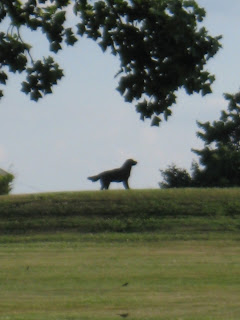 He leadeth me to the still (well, not quite) waters of places I haven't seen in a long time--  specifically, about twenty years:

I hadn't actually planned on riding there.  I passed it en route from my house to no place in particular.  Those of you who ride a lot know the kind of ride I'm talking about.
On the ride, I ended up here.... 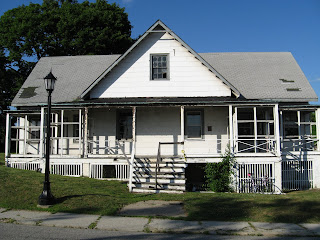 ...among other places.  I guess, in some weird way, it makes sense that I went by the hospital in the second photo before I came to the house you see above.  Both places housed lives that are no longer there.  The difference is that, to my knowledge, I never knew anyone who lived in the abandoned house.  On the other hand, for two years of my life, I was involved, if in a peripheral way, in the lives of some patients, staff members and the director of surgery at that hospital.  To my knowledge, none of them are there any more.


If any of you have grown up on military bases, you probably recall at least one house that looks something like this: 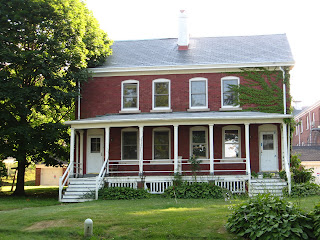 Although this house is not abandoned, it is not occupied, at least for now.  But I'm sure it will be soon.  After all, this is one of the  views from it: 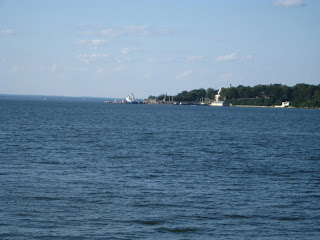 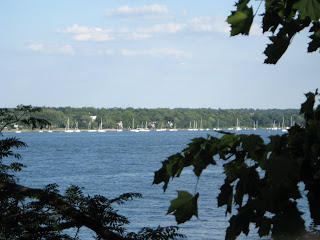 It never ceases to amaze me how much prime real estate the military once had--and, in some parts of the country, still has.


Both of those houses are in Fort Totten, on Long Island Sound in Bayside, NY. It was still an active military base when I was doing poetry workshops with the handicapped and chronically (and, in a couple of cases, terminally) ill kids at St. Mary's Hospital.  Now only a small part of the base is used for Army Reserve exercises; other parts are used to train specialists in the Fire Department.  The rest has become a park with some really lovely car-free places to ride and walk.  Plus--for those of you whose interests are anything like mine--the place is in Gatsby country.


Every week, I used to go to the hospital, which then had a school for the kids who were patients there.  The Board of Ed maintained and staffed it.


Back then, I was living in Washington Heights,  in upper Manhattan.  Unless it was snowing or sleeting, I used to ride my bike--seventeen miles each way, on a Follis ten-speed from the 1960's that served as my commuter.  In some weird way, riding to the kids made me feel closer to them.  I guess it made me conscious of some of the things I could, and they couldn't, do.


Until today, I hadn't been to the hospital in nearly twenty years.  That means, of course, none of the kids I worked with are there.  Some may have gone on to lives much like other adults of their age; a few might be dead.  One girl died during the time I was there; even though she was only eleven, she lived longer than anyone expected.


The director of surgery--who actually initiated the project and secured the grant for it--is probably retired.  So are the teachers who were there at the time, as well as many of the staff members: most of them weren't young.


Even though I haven't seen any of those kids since then, I've thought about them often.  In fact, I thought about them a lot when I was starting my transition.  Many of the poems and stories they wrote--or dictated to me--were about running, flying, jumping, dancing and riding bikes:  the things they couldn't do.  Most people, including their teachers, said the kids had "vivid imaginations."  But one day, when I was talking with the director of surgery--Dr. Burton Grebin--I voiced something I realized at that moment: "They really are doing those things.  Their minds, their spirits, dance, jump and do all those things some of us can do with our bodies."


"That's exactly the reason why I have always supported the project," he said.  "It's the reason why things like poetry and art are, in their own ways, as important as the medicines and procedures we offer here."


That realization, and those kids always stuck in my mind.  And I finally realized why they mattered so much--which is to say, why I, who was pedalling over 300 miles a week, not counting my racing, identified so much with them:  We saw our true selves in our minds and spirits, and our bodies couldn't express who we are.


At the end of every day I worked with them, I used to pedal (actually, coast) down the hill toward Fort Totten.  Back then, it was still an active base and therefore not open to the public.  So, I used to go to a small park that stood just to the west of the fort's entrance, where one could see this: 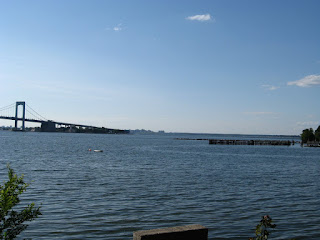 The suspension bridge is the Bronx-Whitestone.   In the fall and winter, I used to sit there and read or write, or simply gaze, until dusk. Then I would start pedaling home along the nice little promenade that winds its way below the span and skirts the water.


As it was the first day of summer, I didn't wait that long today.  I was getting hungry and tired; I'd pedalled about 30 miles, which included a few hills, on Tosca, my fixed-gear.  What else could have I ridden to a current or former military base?  After all, multiple gears are for sissies.  (You know I couldn't resist that one!)