So far, you may have noticed two things:  my favorite colors (purple, green, pink and blue) and my favorite bike maker (Merican).


Well, the bike I bought the other night is neither of those things.  That's probably a good thing--or, at least, it's a good thing that it's not a Mercian.  That's because I plan to park it on the streets. 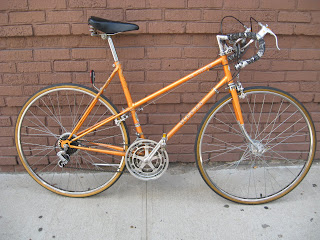 It's a Schwinn LeTour III from 1978 or thereabouts.  I bought the bike because the frame is bigger than most step-through frames made today.  I'm amazed that most stop at about 20 inches (50 cm):  If anything, there are more women of my size (horizontally as well as vertically) than there were thirty years ago.

Also, I decided to buy it because it's a solid bike.  It's not light or fancy, but it will, I think, do the job I want it to do.

Schwinn's LeTour series bikes were made in Japan by Panasonic.  Most of you associate Panasonic with electrical appliances and electronic goods.  But they made some very fine bikes, including the ones they made for PDM, one of the most prominent cycling teams of the 1980's.

This photo shows the roughest part of the paint job and an interesting feature this bike shared with some other women's and mixte frames of that era. 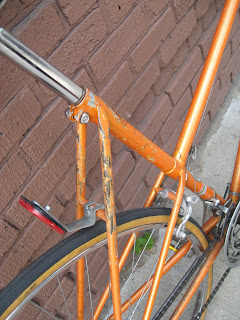 Notice how the rear center-pull brake is mounted, and the long straddle cable.  This eliminates the need for routing the cable up the seat tube and back down again into a stop.  It's not only an aesthetic consideration:  The up-and-down cable configuration is one of the reasons why the rear brakes on so many women's and mixte frames didn't work very well.  I guess the bike builders figured that a good rear brake wasn't necessary, for they probably believed there weren't very many fast women (on bikes, anyway!).

The Schwinn Aprroved-branded brake is a standard Dia Compe centerpull, which is a Japanese-made clone of the Swiss Weinmann centerpull, which was found on Motobecanes, Raleighs and countless other European bikes of that time.

Even though I'm not going to paint the bike, I plan to modify it considerably.  I'm getting a pair of Milan bars and city brake levers, as well as a pair of fenders, from Velo Orange. (I highly recommend VO:  They have excellent products at fair prices, and Chris is a very nice guy.) I placed the order today:  Actually, I returned a seatpost I bought from them but didn't use.  (It's a good seatpost; it just has more setback than I needed.)  And, I also plan to turn the bike into a single-speed.  But it won't be a "fixie"; rather, it will have a single freewheel.  I have used them on commuter and "beater" bikes before, and I like them because they're simple and, most of the time, I don't need anything more for quick local rides.

I also plan to add a rear rack and front basket.