Today my ride consisted of a spin to the park next to the Queensboro Bridge and over the bridge itself to...Bicycle Habitat.  I had to bring in a rear wheel they built for me so it could be tuned up.  Most shops that build custom wheels will tell you to bring them back after two hundred miles or so for a check-up.

Although the wheel was still rideable, some spokes had come loose.  But, as it's a custom-made lightweight wheel, I want to keep it in optimal condition.  Arielle, my Mercian road bike (which I rode today and the other day), deserves no less.

More years ago than either of us will admit (well, OK, more than I'll admit), Hal built me a pair of wheels that I rode along the Mediterranean from Italy into France.  I carried a pair of panniers on my rear which progressively filled with all sorts of chotchkes from flea markets and such, as the exchange rates were very favorable to the dollar.
It's really a wonder I made it through that trip.  I drank way too much wine, and other things.  A glass-half-full person would say that I must have had good bike handling skills.  That's probably true.  But I still don't know how even my pedaling prowess got me through one particular day's ride.
I was about thirty kilometers south of Genoa, somewhere on the road that zigged and zagged along that rocky coastline--or, to be more accurate, along the edges of cliffs from which loose rocks--and pieces of that road--tumbled into the sea.
The day was overcast when it began; by the time I got to that stretch of road, a storm that surprised me with its violence blew in from the sea.  I didn't know the Mediterranean could have such rough weather!
I also didn't know--until I got to that stretch of road--that the Romans may have been the greatest road builders in the western world, at least until the nineteenth century.  But they didn't seem to think much about safety, at least not in the ways we think about it.
So that road along the edge of cliffs that drop into the sea was about the width of one and a half vintage Alfa Romeos.  The guard rail on the edge stood up to about my knees.  The wind that was waling at my side could have easily sent me over that guard rail into a wild blue yonder that was darkening in gray.
I may not know how I survived that ride.  But I can tell you how my wheels made it:  Hal built them.
Hal is an excellent wheel builder and mechanic.   He and Charlie, the store's owner, treated me and my fellow employees very well when we worked for American Youth Hostels.  Back then, AYH's New York headquarters were on Spring Street, around the corner from Habitat.  We sent a lot of business there:  People would book their places on AYH-sponsored tours, or simply get their Youth Hostel passes and other necessities from us, and then would go to Habitat for wheels, tires, bags or other things they needed for their tour.  A few of those people even bought new bikes.
Back then, there were still real, live artists living and working in the lofts that abounded in the neighborhood.  The Soho stretch of Broadway hadn't yet become a fashion-designers' strip mall.  So, as you can imagine, the clientèle of the shop was a bit different.
Then, as now, many messengers went to the shop, as it's along one of the routes they would take from the Wall Street area to Midtown.  Some of Habitat's customers lived nearby.   Most of the neighborhood's residents at that time didn't have a lot of money. One might say that Soho at that time (early 1980's) represented the last stand of genteel poverty in New York.  A few of the artists and others who lived in the neighborhood bought bikes at Habitat; many more had their mounts repaired or resurrected there.
Interestingly, the people who worked in the shop--including Hal and Charlie--reflected what some might have called the spirit of the neighborhood.  Hal is a musician; other current and former shop employees are and were artists of one kind or another, or involved with theater or dance.  And Charlie is a civil engineer by training who, like the so many of the personnel and clientèle of that shop, are or were trying to live in this city without becoming part of the "rat race."
Whether or not cycling was ever the most important thing in my life, it has been one of the few constants for me during the times I've described and the ones in which I'm living.
And now that I think of it, Habitat--like most enthusiasts' bike shops--was, back in the day, overwhelmingly male.  During the busy season, they might have a woman selling the bikes, but all of the permanent employees I recall--and nearly all of the customers that I can remember seeing--were male.
I'll give you an example of how things have changed: 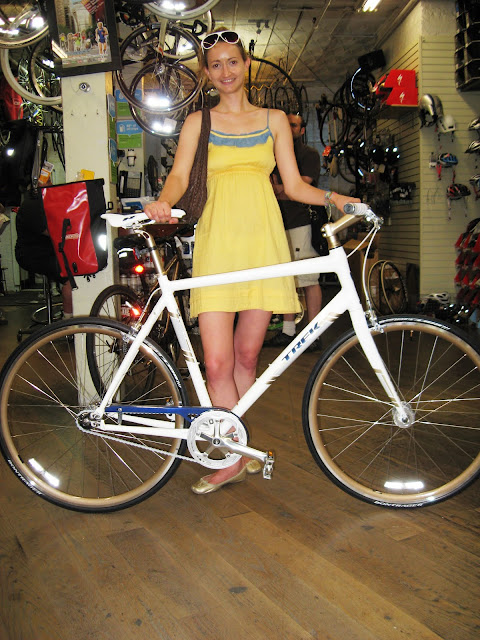 I couldn't get over how well Melanie's dress and shoes coordinated with her bike, particularly with the gold parts and the blue chainguard.  Can you just see her in the peloton now?

I didn't ask whether she chose her bike to go with her ensemble.  Even if she did, I won't complain:  I don't think anyone else in the shop minded. 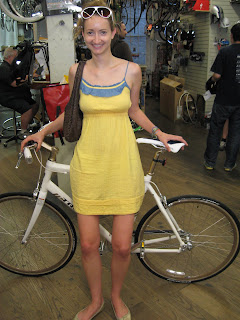