Without the Need to Escape

I rode to Point Lookout, again.  At approximately 65 miles round-trip, it's tied with the longest trip I've taken this year, and since my surgery.

On a day like today, when the sea seems to be the shadow of a preternaturally clear sky--or when the sky is light refracted through a cobalt stained-glass reflection of the sea--it seems as if the water is a sort of light, and that light flows and ripples and undulates like the waves of water. 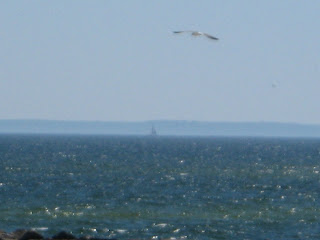 And the ripples of water and waves of light become each other's reflections: 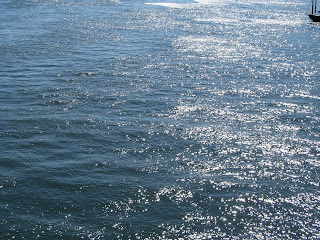 Just before I crossed the bridge from which I shot the above photo, I saw one of those things that could you forget that you're in Queens: 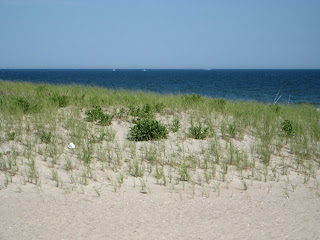 The dunes are in Arverne, which is just to the east of Rockaway Beach.   The streets leading to the Arverne stretch of the beach and boardwalk were, not too long ago, filled with bungalows and cottages that served as summer homes for some New Yorkers and permanent residences for some cops and firefighters.  Then most of them were abandoned when housing projects were built in Far Rockaway, the next neighborhood to the east and the last before the Nassau County line.


I was pedalling into a fairly stiff breeze as I rode past those dunes toward Nassau County and Point Lookout.  That meant, of course, that my ride back was actually easier: enough so that I found myself thinking of a poem by Pablo Neruda:

Actually, those are just the first two stanzas of  a poem from "Los Versos del Capitan."  The selection above translates into something like this:
The wind is a horse:
Hear how it runs
through the sea,
through the sky.
He want to take me away:
Hear how he roams
through the world
To take me far away.
Please forgive my poor translation:  It's really much better in Spanish.
Here is my "horse" : 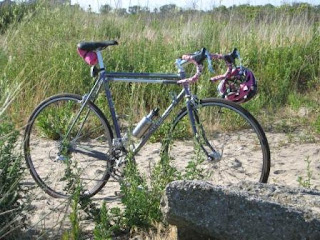 And here is how someone is "riding" Neruda's "horse": 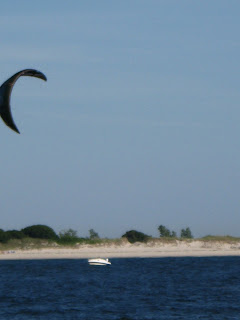 Yes, that white object is a board of some kind.  A man is riding it and the wind is pulling his kite.
Somehow these rides that are directed by the wind and follow the sea are even more innocent--almost to the point of being naive and romantic, as Neruda's poem is--than the ones I took as a teenager and in my early adulthood.  Those now-long-ago rides kept me sane, at least to the degree that I was.
On summer days, I would ride down to Long Branch, Asbury Park or beyond.  I learned that around 2:00 every afternoon, the wind would shift along the coast, so the wind I fought on the way down would blow me back up to Sandy Hook, the northernmost part of the Jersey shore.
I remember that long, straight flat stretch of Route 36 along the beaches in Long Branch and Sea Bright.  Some days I would just let the wind do my work, while on others I would spin as fast as I could.  It was my release and escape; now that I no longer am trapped by what I was trying to escape, there is just the ride along the sea.