Crossing Another State Line From Memory

Is Arielle inspiring wanderlust in me?  Or does she have it all on her own, and does she merely take me along for the ride? 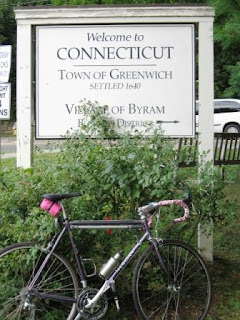 Today we crossed another state line.  So that makes two-- Pennsylvania two weeks ago, when I rode to the Delaware Water Gap, and Connecticut today—since my surgery.

Going to New Jersey doesn’t count.  Not really.  Or does it?  We New Yorkers sometimes say that Jersey is a foreign country.  I wonder whether the Brits say that about the eponymous island in the English Channel.  Although it’s a semi-independent part of Great Britain, it’s actually much closer to France and has a language--Jerriais-- that bears more resemblance to French than it does to English.
Then again, lots of people would like to think of anyplace where Snooki would live as a country different from their own. Otherwise, they’d start campaigns to deport her.
Anyway, I started my ride by crossing the RFK Memorial (nee Triboro) Bridge to Randall’s Island and the Bronx, through neighborhoods where women don’t ride bikes.  I made a wrong turn somewhere north of Fordham Road and ended up on a highway and riding a square around the perimeter of the Botanical Gardens.  From there, I managed to find my way to Westchester County.
For someone who lives in New York, I really don’t spend much time in Westchester County.  Occasionally a ride will take me to Yonkers or Mount Vernon, both of which are just over the city line from the Bronx.  But I never have felt much inclination to explore the rest of the county.
Part of the reason might be that my first experience of cycling in Westchester County came the year after I came back from living in France.  That in itself can make Westchester, and lots of places, seem like a comedown.  (I think now of the time I ate a particularly bad take-out dinner the day after returning from a cycling trip through the Pyrenees and the Loire Valley!) But I first entered Westchester County on a bike near the end of a cycling trip from Montreal to New Jersey, where I was living at the time.  I had cycled through some nice Quebec countryside, the Vermont shore of Lake Champlain and the Berkshires before entering New York State near the point where it borders on Massachusetts and Connecticut.
That night, I slept in a cemetery that was in or near the town of Austerlitz, NY.  It was a clear, moonlit and pleasantly cool evening.  I had no idea (and wouldn’t find out until the next day) where I was, and I had almost no money left.  So I simply rolled out my sleeping bag.   I slept fine:  There was absolutely nothing to disturb me.  And I guess I was a good neighbor.
After all that, Westchester County seemed like just a place with lots of big houses and lawns and a bunch of golf courses.  It wasn’t bad; it was just a bit of a letdown, I guess.
Later, Westchester would become the place where friends of Eva, Elizabeth and Tammy lived.  And all of those friends didn’t like me, or so it seemed.  Going to their homes felt a bit like going to the in-laws’ or to a relative of one of your parents—and that relative didn’t like your other parent, and saw you as his/her child.
Fortunately, I didn’t think about any of those things today.  I didn’t see as many houses that seemed like ostentatious versions of houses the owners saw on their European trips as I recall seeing in previous treks through the county.  And, when I stopped in a gas station/convenience store for a bottle of iced tea, I saw the friendliest and most polite attendant I have seen in a long time.  He’s from Liberia.
I hadn’t started out with the intention of going to Connecticut.  But after stopping at the gas station/convenience store, I realized that I wasn’t far from the Mamaroneck harbor.  So I rode there, along a fairly meandering road where two drivers pulled over to ask me whether I knew how to get to the Westchester Mall.  It’s funny:  People assume that because you’re on a bike, you live nearby and are familiar with the area.
From Mamaroneck, I took another road that zigged and zagged toward and away from the shore of Long Island Sound to Rye.  There, I knew that I wasn’t far from Connecticut, so I continued along the road to Port Chester, the last town before the border.
I only took a few photos, and none of them came out well.  But that part of the ride was pleasant, even charming at times.  Then, after crossing the state line, I ventured up the road into downtown Greenwich.  I’d have gone further, but I started later than I intended to and didn’t particularly want to ride the last few miles of my trip in the dark.  I’m not adverse to night riding; I just didn’t feel like doing it tonight.
In Greenwich, about half a mile from the state line, there’s an Acura dealer.  Just up the road from it is an Aston Martin/Bentley dealer, and a bit further up the road are a BMW, then a Mercedes, dealership.  So, I’m guessing that the annual per-capita income of that town is probably not much less than I’ve made in my entire life.
On my way back, I rode down Huguenot Avenue.  It’s in Little Rock.  Actually, it’s in  New Rochelle, a town founded by the people for whom the avenue is named. (The town is named for La Rochelle, the French port from which most of them sailed.  “Rochelle” means “little rock.”)  If any of you recall The Dick Van Dyke show, which featured a young Mary Tyler Moore, you’re old.  Seriously, you might remember that the show took place in New Rochelle.  The town has changed a bit since then, as you can see from new structures like this: 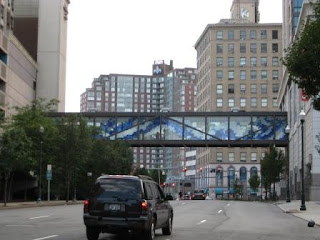 It connects the local Trump Tower (How many of those things are there?) with another building on the other side of the Avenue.  I wonder whether cyclists are allowed to ride in it.
at August 08, 2010