The Season of The Trompe d'Oeil

Here's one way to tell whether or not you have "bikes on the brain." 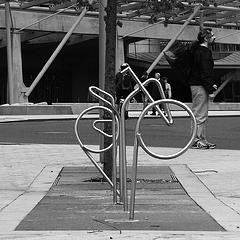 No bikes were harmed to make this picuture.  Actually, it's a couple of bike racks in front of the Scottish Parliament building.

The photo reminds me, oddly enough, of this time of year:  You can't always trust some things--especially the weather--to be as they seem. The temperature reached 70F one day last week. It had been 60 the day before.  But the day after, the temperature had fallen to 30 and the wind increased.
Yesterday, the weather was mild but rainy.  And now it's about to drop again.
A day or two of mild weather in February seems like summer because of the perspective from which it's seen:  after two months of winter and a few snowstorms.  And those two recent "heat waves" melted most of the accumulated snow. That alone is enough to make it seem warmer than it is, or at least to make the spring seem as if it's closer.  There are still about three more weeks to go, I think.
at February 26, 2011