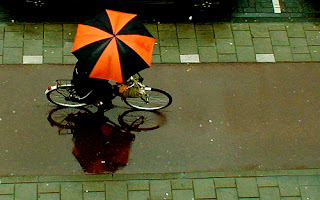 It's supposed to rain on and off today.  I suppose I could play chicken with the rain again.  However, I somehow feel that I wouldn't be so lucky in daring the weather as I was in chancing it.  Actually, I wasn't even chancing it:  I just had enough dumb luck to be able to ride between rainfalls.

If it does rain, I'll probably do some bike work I'd been planning.  Maybe I'll even build the wheels I had planned for Marianela.  I'm not using any fancy components on it, save for the DT spokes.  (They're going to connect Sun CR-18 rims to IRO hubs which look like they're made by Formula.) But I think that, and the care I'll take in building it, will make it a better wheel than some of the stuff they sell on e-Bay.

What else?  When I swap the wheels, I'm going to put street tires on it rather than the cyclo-cross tires I've been riding.  They still look good, so I'll save them for next winter.
I also just got a pair of shifter pods from Velo Orange.  Those aren't for Marianela, though; they're for Helene.  I was going to get a pair of Paul Thumbies.  But I found out that the road version works only on the part of the bar that bulges near the clamp.  And the mountain version would be too narrow to fit on the grip area of the Velo Orange Porteurs that Helene has.  The VO pods are made to fit either road or mountain bars, and they'll work with the Dia Compe Silver shift levers that are on the bike.  And I just happen to have a pair of cable guides I saved from the last set of Ergo levers I used.
Now...Which do I do first?  Of course Helene is more fun to work with (not to mention ride); Marianela is my "beast."  But Marianela's rear wheel popped a spoke a couple of weeks ago.  That's usually a sign that a wheel needs to be rebuilt or replaced.  Then again, no spokes have broken since.  I find that on dying wheels, spokes tend to break pretty frequently.
Plus, it's been quite a while since I built a pair of wheels.  I used to do it in one of the shops in which I worked, and I've built a few wheels for myself.  But since I haven't done it in a while, I wonder whether my skills have deteriorated?  I know how to do it; I just wonder whether i've lost the "touch" I might have (or merely imagined) I had.
Oh well.  This is probably one of those decisions I should make after I've made (and eaten!) a crepe or two.
at April 10, 2011