I was such a bum today.  Actually "bum" has kind of a male connotation to it.  At least, I don't recall anyone referring to a woman as a "bum."  Are there bumettes?  Hmm...That sounds like the name of a band or something.

(Speaking of bands:  I actually played drums for a local punk rock band when I was in college.  Back then, it was perfect for me because I didn't have to be very good at it, and I could do it drunk, which I often was in those days. But I digress.)


So how much of a bumette was I?  Well, for one thing, I slept very late.  And when I opened my door, I felt as if I'd stepped into a blast furnace.  That destroyed my incentive to do much of anything.  So I didn't ride today.


And what do they say about idle hands?  Well, actually, I had stuff to do, but I procrastinated a bit.   I finally listed a few things on eBay, including a couple of parts I pulled off the bike I just bought.


I find that I prefer photographing most bikes and parts in daylight.  So I find myself moving into all kinds of weird spaces and position to get the light or space I'm seeking.  Sometimes, I'll go into the driveway next to where I live, as it is partly covered.  And it offers some interesting views: 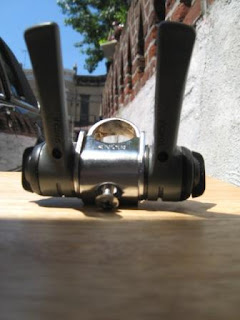 Once I leave the confines of the driveway, the shifters turn  into deadly weapons: 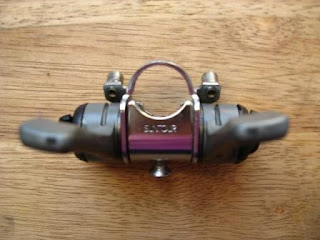 Tomorrow morning, I'm definitely getting up early and going for a ride!