Whenever you see neon- or Easter egg-colored "deep V" rims on some hipseter's or messenger's fixie, console yourself with the thought that things have been much, much weirder.

You see, all of the rainbow boys and girls are merely aping a trend of the 1890's.  Yes, they really had Velocity Deep V rims in "antifreeze green" in the days of the penny-farthing. I know:  I was there.

All right, so now you know I was pulling your crank--I mean, your leg.  But I can tell you that cyclists actually wore tweed in those days!

When we see images of cyclists and their mounts from the 1890's, they usually seem quaint.  I don't think that a century hence, people will see velo-images of the 1990's in the same way.

Now, that was a time of some really weird bike parts.  First of all, mountain biking took off in the late '80's.  Around 1990 or so, mountain bikes and components appeared that were not derivatives of their road and touring counterparts.  (That's also when the first frames with suspension were built.)  By the mid-1990's, it seemed that every other twenty-something in California who had access to his father's machines was making derailleurs, brakes, seat posts, cranks and almost every other part.  Some were actually quite good and were improvements over what had been available.  On the other hand, some stuff was merely what we used to call "ELS", or Expensive Lightweight S**t.

In the latter category were nearly all cranksets made by those one-man cottage industries.  I knew riders who weren't built like NFL linebackers and still managed to break Kooka, Topline and some of those other over-machined, over-priced crank arms.  And then there is specimen:  a Cucamonga crank: 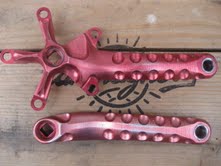 Whoever made these cranks seemed determined to incorporate every whacky idea and trend in bike components from the previous three decades or so.  On one hand, the holes are from the '70's, while the shape suggests the '80's mania for aerodynamics, or the pretense thereof.  And the pink anodizing is right out of the '90's.

I don't know anyone who actually rode those cranks.  Perhaps they were made to be "collectibles".  What will some future anthropologist surmise about '90's cycling and cyclists from them?