Creatures Along The Way


When you ride off-road—or even on roads or paths that cut through flora and fauna—you are bound to encounter creatures great and small.

Here in New York, if you ride through or near a park—or any place with more than a couple of trees—you’ll see squirrels.  Most of them will simply avoid you.  The same is true of chipmunks.  In fact, most creatures you might encounter in or around this city really don’t want to go anywhere near you.  They include the deer that have darted or loped across my path just on the other side of the George Washington Bridge and in the leafy parts of Westchester County.

In fact, most of the animals that venture near you are sick or otherwise impaired, or dying.  That includes the large rat that went “thwop” against the side of my Deep-V rim when I sliced through late-summer haze along the flat stretch on the east side of Prospect Park.  At that time—around 2001—there’d been a number of construction projects near that side of the park and, as someone explained to me, the excavations opened up various Pandora’s boxes.

Far more charming—and healthier—were the oak bark-colored mountain goats that seemed to line up along the side of the road up the Col du Portillon/ Coll de Portillo on the border between France and Spain.  I half-expected them to chuckle:  After all, they climbed that mountain every day.  And they didn’t have a 36X28 gear!

Handsome creatures they were. But for sheer cuteness, none beat the tiny green lizards that darted across my path during my last ride of my most recent trip to Florida.  You see them any warm day.  I’ve tried photographing them but they’re too quick.  That’s also the reason why I’ve never run any over.

I also saw a few armadillos.  However, they didn't try to come anywhere near me.

Of course, anyone in any kind of vehicle—whether powered by one’s own feet or an internal combustion engine—runs the risk or has the opportunity to see, meet, dodge or bump into creatures of one kind or another.  It also doesn’t matter whether those vehicles are on land, in the air or on the water: 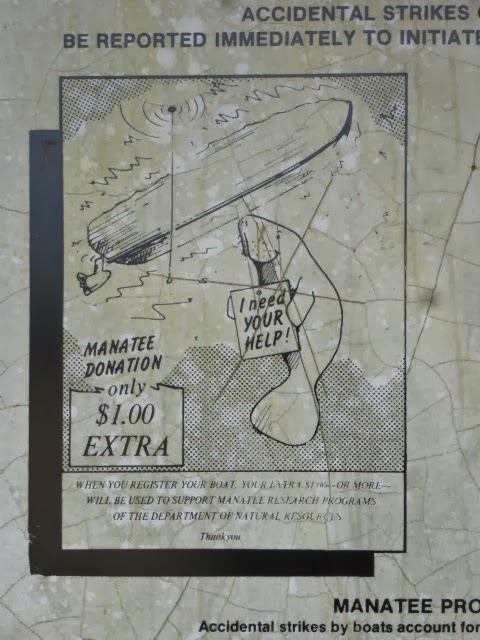 I actually came within a couple of feet of a manatee once.  I was swimming in Matanzas Inlet (which, to tell you the truth, I probably wasn’t supposed to do) on one of my first trips to the Sunshine State.   The creature, which looks something like a walrus without the mustache or the public relations, gave me a shy, quizzical look.  I liked it in the same way I like wrinkly dogs and shaggy cats. I assume other people feel the same way.

I wonder how it would have reacted to me if I’d been on my bike.