If you've been following this blog, you know that I'm interested in (and ride a few) vintage bikes, parts and accessories---in part because some of the stuff I rode in my youth (and even later!) is considered "vintage" now!

Anyway, if you pay attention to really vintage bikes (i.e., ones made before I was born!), you know that some bike-makers got creative with their parts, some of which they manufactured themselves.  Among them are the chainrings on cottered steel cranksets, which sometimes had interesting designs or the name of the bike manufacturer.

Here's one that's on eBay now: 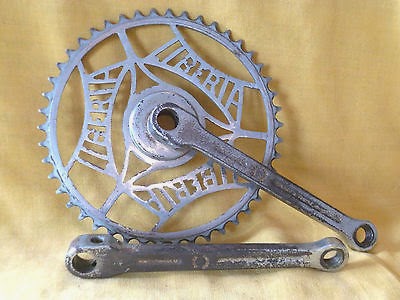 Turns out, Liberia was a brand of bicycles made by Grenoble-based Manufacture Francaise Cycles (MFC), starting in 1918.  In MFC's early days, they also made motorcycles that bore the same name as the velos.

MFC founder Antoine Biboud was a keen cyclist (Why wouldn't he be in that part of the world?  Trust me:  I've ridden there!) who insisted on strict quality control.  Even his lowest-priced models had carefully-mitered tubes and carefully filed lugs.  His insistence on quality might be one reasons neither he nor his kids (who inherited the company and ran it for the rest of its history) ever tried to sell his bikes much beyond the Rhone-Alpes region of southeastern France.

Biboud's motto translated roughly to "Don't follow the peloton, lead it!"  He passed it on to the teams his company sponsored during the two decades after World War II.  One of its riders, Henri Anglade, was the French national champion in 1959; other Libera riders took various honors in the Tour de France and other races.

After a two-decade absence from the peloton, Liberia teamed up with Mavic in 1988 to co-sponsor the RMO team, which featured such riders as Richard Virenque and the Madiot brothers.  Unfortunately, the successes of these cyclists weren't enough to buoy the company's fortunes. So, by the mid-1990's, Liberia, like many other mainly-regional French bike makers (and some national and international ones like Mercier) fell victim to the rising tide of Taiwanese bikes.

Even though I've seen a few Liberia bikes, I can't help but to think about the African country with that name.  And, someone who doesn't know much about cycling history might, at this point, be put off by the name, what with the Ebola virus.

At least the seller, Reperagevelo, is a part of Repareges, a French non-profit that sends bicycles to Burkina Faso and Mali to provide much-needed transportation, as well as jobs and other help for disabled people.