Why Did The Fill-In-The-Blank Cross The Road--In My Path?


I’m still thinking about the cat that smacked into my front wheel and caused me to crash.  The bike and I are OK, but I wonder what happened to him/her.

Other cats have crossed my path as I’ve pedaled.  One or both of us get out of the other’s or each other’s way.  At least, that’s how it worked until that unfortunate feline

Dogs are different.  I’ve been chased by a few; others jumped and tugged their leashes.  Some have walked up to me when I’ve stopped, and I rescued one that was wandering around in the middle of an intersection not far from where I worked.  I carried her in one hand while I steered with the other.  She stayed remarkably calm as I pedaled through traffic.  If I didn’t already have two cats—for whom I had to plead with my landlady for permission to move them with me into the house in which I was living—and had a bigger living space, I might have kept that cute little Yorkie—at least, I think that’s what she was.

As for other animals, I think most can be placed in one of two categories:  the ones who do whatever they can to get out of our way and the ones that barrel ahead in a straight line, completely oblivious to any cyclist who might collide with them.

Deer are in that latter category.  Several have bounded across my path; a riding buddy and I came within a tire width (or so it seemed) of splattering ourselves against the side of one that darted across the road at the bottom of a steep hill we descended.  In Bucks County (PA), no less.  You can’t make this stuff up.

I’ve seen moose, ibexes and mountain goats act in the same way:  straight ahead, with blinders on, across the road.  I wonder whether all ungulates behave that way.

Animals that avoid you include cats (most of the time), squirrels, chipmunks, lizards, armadillos and, believe it or not, snakes.  At least, the three snakes that I can recall crossing the path I was riding slithered away.

Every one of those animals I’ve mentioned has entered upon “my” (Talk about a sense of entitlement!) riding space as I approached.

In Florida, I’ve ridden paths and roads that rimmed or transversed swamps.  I’ve seen alligators, but none came near the road or path.  Do they avoid those things altogether, or was I just lucky? 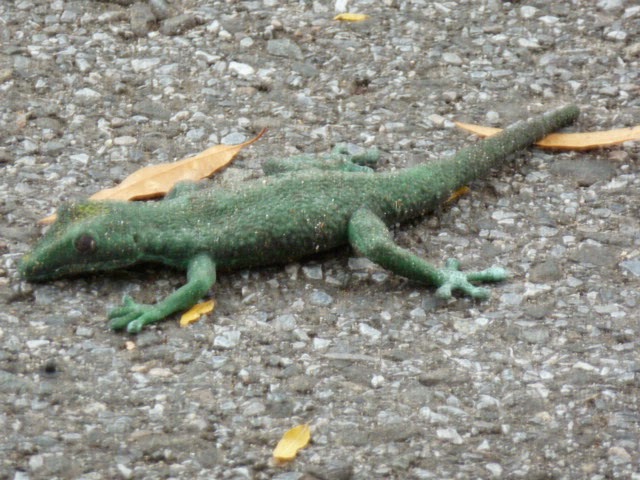 Why did the alligator cross the road?  Well, actually, this one didn’t cross:  It was just standing there, on a street in DUMBO as I rode by.  I can’t help but to wonder:  Did it somehow just end up on the street in that position, or did someone leave it there?

Email ThisBlogThis!Share to TwitterShare to FacebookShare to Pinterest
Labels: animals, animals that cross into your path