At this time of year, it's hard not to think about children, whether or not we have any of our own.  After all, we were all kids once, and most of us have memories--for better or worse, or both--of this time of year.

For some of us, those memories might involve a bicycle, specifically finding one under the tree.  "The Retrogrouch" wrote a nice post about that last week.  I responded with a comment about the time I got a Royce-Union three-speed bike when I was seven years old.  The bike was much too big for me; I wouldn't be able to ride it for another couple of years.  That bike also holds a special memory because it was the last gift my grandfather gave me.  In fact, that Christmas was the last day I spent time with him:  He died the following March.


But whatever the circumstances, I think any bicycle found under a tree on Christmas morning always holds a special place in a kid's heart, even long after he or she is no longer a kid.  Even if it's made from gaspipes, nothing can be prettier or shinier or faster than that bike left by "Santa"; if we can't ride our new steeds that day, nothing seems more worth the wait, whether for snow to melt or, in my case, to grow into the bike.


My bicycle's the fastest
that the world has ever seen;
it has supersonic engines
and a flame-retardant sheen.

My bicycle will travel
a gazillion miles an hour --
it has rockets on the handlebars
for supplemental power.

The pedals both are jet-propelled
to help you pedal faster,
and the shifter is equipped
with an electric turbo-blaster.

The fender has a parachute
in case you need to brake.
Yes, my bike is undeniably
the fastest one they make.

My bicycle's incredible!
I love the way it feels,
and I'll like it even more
when Dad removes the training wheels.

(From The Aliens Have Landed At Our School. a book of children's poems by Ken Nesbitt) 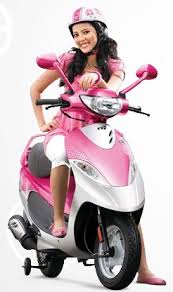 Email ThisBlogThis!Share to TwitterShare to FacebookShare to Pinterest
Labels: childhood memories, Christmas bikes for kids, kids on bikes, The Retrogrouch