The first time I saw this painting 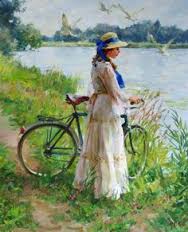 I said to myself, "I didn't know Monet painted that."

Now, I have never claimed to be an expert on the seminal Impressionist painter.  I can say, however, that I probably am more familiar with his work than the average layperson.  At least, I know enough to know that not all of his images are of waterlilies on ponds, lovely as those are. 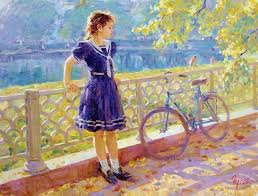 And I know enough to tell a Monet from a Manet--and, certainly, from a Sisley, Pisarro, Renoir, Degas or Gaugin.  Still, I had to wonder, "Why did I never see this in any of the books--or in the Musee d'Orsay? 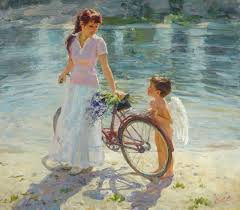 The first vehicles most of us would identify as bicycles--or semblances of them--were created early in Monet's life.  The high-wheeler or penny-farthing came along when he was coming into his own as an artist; the "safety" bicycle would be invented in the middle of his life, when he was becoming his most productive and innovative.  And the "bike boom" that seized most of the Western world (and Japan) at the end of the 19th Century and the beginning of the 20th coincided with his etudes of the Rouen Cathedral and his early Giverny work.  So it's certainly not inconceivable that a bicycles would appear in Monet paintings--or, for that matter, works by any of his contemporaries.

But, as far as I know, there are no velocipedes in any of his work.  This painting--of his son, Jean, on a hobby-horse--is about as close as he comes to including a bicycle in anything he did: 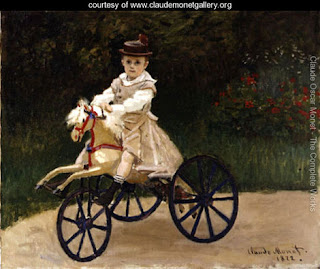 The artist whom I mistook for Monet, however, has graced quite a few canvases with his depictions of two-wheelers and the people--women and girls, mainly--who ride, or at least accompany, them.

And I wouldn't be surprised if he turned out more paintings with two-wheelers in them.  Yes, the artist in question is very much alive and working:  Vladimir Gusev. 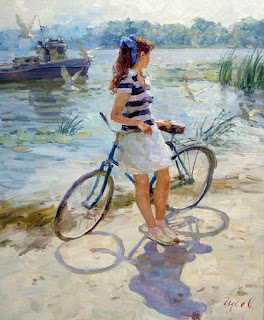 If his name sounds familiar, it probably means you've been reading this blog.  In a bizarre coincidence, he shares his name with the unfortunate cyclist who--in my opinion, anyway--had his career ruined by the hypocrisy and mendacity of Johan Bruyneel, the directeur sportif of Astana, who threw him under the bus after the Union Cycliste Internationale (UCI) threatened to ban the team (and defending maillot jersey winner Alberto Contador) from participating in the Tour de France after doping allegations.

Yes, we're talking about the same Johan Bruyneel who managed someone named Lance Armstrong on something called the US Postal Service team.  And, yes, the same UCI that looked the other way when Lance was winning but forced Gusev to drop his suit against them in order to continue his career. 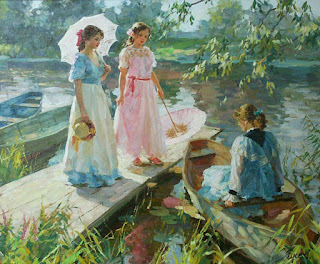 The painter Gusev, of course, has nothing to do with any of that.  And the bicycles and cyclists in his paintings seem worlds away from the scandal-ridden milieu of professional racing. 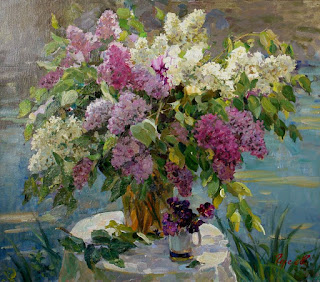