A few days ago, I recounted a chance meeting with a fellow named George in Greenwich.  He complimented Arielle, my Mercian Audax, and showed me photos of his very nice Raleigh Competition GS, on which he converted the drop bars to uprights and made a couple of other changes.

His "conversion" is nothing unusual these days (except that his is nicer than most):  Lots of people are taking nice (and sometimes not-so-nice) vintage ten-speeds and turning them into city or country bikes, upright tourers or stylish commuters. 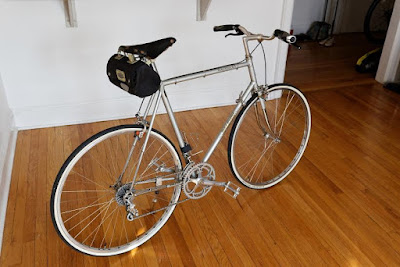 In a comment on my post, George said he was trying to replicate a Raleigh Super Tourer.  It's a bike one rarely finds:  I've seen only  four or five of them.  And I don't recall seeing one on eBay, Craigslist or any of the sites that list used and vintage bikes.  (Then again, I check those sites only occasionally.  Really! ;-))

One reason why it's so rare is that not many were made--at least, in comparison to other Raleigh bikes. As best as I can determine, it was made during four model years:  1974 through 1977.  Another reason is that not many Super Tourers were exported to the US, and even fewer sold.  The few American shops that ordered Super Tourers, as often as not, got "stuck" with them for years.  I would suspect that more than one Super Tourer owner came by his or her steed the way George encountered his Competition GS:  A bike shop had it in the back room (or on the showroom floor) a few years after production ceased.

This parallel between George's experience and the possible scenario I have envisioned is not coincidental:  In essence, the Super Tourer and the Competition (the original as well as the GS) were the same bike.  Well, more or less, just about, anyway.

Much of the componentry was the same: mainly high-end French stuff.  The pre-GS Competition had Normandy "Luxe" hubs and Huret Jubliee derailleurs; so did the Super Tourer.  The short-cage Jubilee--which came on both bikes--shared an interesting trait with other European derailleurs of the time:  It could wrap up miles and miles of chain, even though it wasn't made to handle a rear cog larger than 26 or 28 teeth (depending on your dropout's configuration).  Thus, it could handle triple and wide-range double front chainrings. That is one reason it was often used on randonneuses from the constructeurs.

Now here's where things started to get weird:  The Super Tourer was made in ten- and five-speed versions.  The ten-speed had what seemed to be a triple version of the Stronglight 93 crankset, with a guard (very pretty, actually) where the outer chainring would have been. The five-speed sported a Specialites TA "Criterium" chainset:  essentially, a a Pro-Vis 5 (a.k.a. Cyclotouriste) with one chainring, and a chainguard..

For some more weirdness, the Competition GS came with Weinmann "Vainqueur" centerpull brakes while the first year's production of the Super Tourer had Weinmann's short-lived "Dynamic" brakes--sidepulls.  In those days, sidepull brakes came only on bikes at the very top and bottom of the price spectrum; almost everything in between came with Weinmann, Mafac, Dia Compe or Universal center-pulls. The high-end sidepulls like Campagnolo's were ridden mostly by racers.  Most cyclists never saw them:  The only sidepulls they saw were the lower-end models found on cheaper bikes. As an example, the Schwinn Continental was equipped with centerpulls, but the Varsity came with sidepulls.

So, some people assumed the Competition was a "better" bike because it had centerpulls.  Or, if they knew how good the Super Tourer frame was, they wondered what sidepulls were doing on it.  Unfortunately, they had good reason to wonder--about those sidepulls, anyway.   A few years earlier, Altenberger made the "Synchron", an early version of dual-pivot brakes.  Like most of the company's offerings, it was cheap and crudely finished, intended for lower-end bikes.  Weinmann tried to clean it up a bit. The stopping power was OK, at least in the beginning, and with the levers that came with the Super Tourer. But, in time, the pivots worked loose and, as we used to joke, the Dynamic would devolve into a brake with the worst features of centerpulls and sidepulls.

(And you thought Shimano invented dual-pivot brakes in the early 1990s!)

The Super Tourer also suffered because of another notion novice American cyclists developed during the Bike Boom.  It's a notion I admit I had for a long time:  A "serious" bike had dropped handlebars and a narrow saddle--usually leather Brooks or Ideale, though Italian-style plastic-and-foam saddles were starting to make their appearance.  Shift levers were mounted on the down tube, and such a bike didn't have fenders.

You guessed it:  the Super Tourer had fenders.  The ten-speed version had some pretty neat-looking Bluemels Classiques, which were black plastic with a ribbed chrome stripe down the middle, a white mud flap on the front and a white-framed reflector on the rear.  The five-speed sported silver plastic fenders--which, I believe, were also Bluemels Classiques.

Fenders?  Fenders!  And upright handlebars.  (I think they were North Road, or some similar bend, from GB.)  And...and...stem shifters!!

Oh...and the first year's production of Super Tourers (the ones with the Synchron brakes) came with mattress saddles. Yes, you read that right:  a seat even thicker than one of Dagwood's sandwiches--with springs!  Vertical springs!  Horizontal springs!  And bag loops that looked like they could carry the biggest offerings from Carradice, Karrimor, Chossy and all of the other classic cycle luggage makers, all at once.

In 1975, the Brooks B66 replaced the mattress saddle.  It had springs but at least it was a...Brooks.  Tensioned leather.  But the bike still had those bars.  And fenders!

You simply couldn't show up on a club ride, let alone ride in a pack of wannabe racers, in the mid-1970's with a bike like that unless you were 90 years old and accompanied by your grandparents--even if that bike had a hand-brazed Reynolds 531 frame, Huret Jubilee derailleurs, Stronglight or TA cranks, etc.   You could just as well have shown up in a petticoat or a chain of mail.

Now, you're thinking that it's very, very ironic that George and other people are turning classic road machines into bikes like the Super Tourer--forty years after you could have bought such a bike, stock, off a showroom floor--or asked a Raleigh dealer to order it for you.  (Vera, my green Mercian mixte, is really just a female version of such a bike--which is what I wanted it to be.)   Perhaps it's even more ironic that there are new bikes that are, at least conceptually, modern versions of the Super Tourer.  (One could argue that some  Rivendell and Velo Orange bikes are, at least to some degree, updated versions of the Super Tourer.)  A lot of people want sprightly but comfortable rides: something that's relatively quick but will allow them to ride the same clothes and shoes they wear to work or to shop, date or simply hang out.  Or, age and other things have caught up with them and they're not as flexible as they used to be--or simply have lost their pretentions to racing.

What if Raleigh were to introduce that bike today?  They wouldn't have to change much, really:  perhaps only the shifters, which would move to the handlebars from the stem, and would be indexed to accommodate contemporary derailleurs and cassettes. (I have always liked the Jubilee, but I don't imagine it would work very well with handlebar shifters or more than seven sprockets in the rear.)  And, of course, the 27" wheels and tires would have to be replaced with 700Cs.  Otherwise, Raleigh could re-introduce the bike "as is", I think. 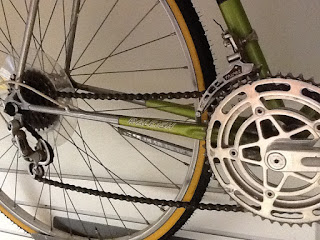 Finally, if you think it's ironic that people are seeking out bikes like the Super Tourer--or are converting other bikes into versions of the ST--you'll appreciate (or perhaps wince at) this story.  Near my undergraduate university campus, there was a bike shop that seemed to be there for even longer than the university itself.  Its owner was ready to move to Florida, or any place with warmer winters than New Brunswick, New Jersey.  Nobody wanted to buy the shop, mainly because of its location on what was then the town's Skid Row.  So, he had to sell off his inventory, which--you guessed it--included a Sports Tourer he'd stocked several years earlier.

And, yes, he did sell it--after swapping the upright bars for dropped bars, the mattress saddle for a Brooks B17 and the Synchron brakes for Weinmann centerpulls.  And he took off the fenders.  In essence, he turned the Sport Tourer into a Competition.

Still, he took a loss on that bike.  I wonder whether the person who bought it still has it.  Wouldn't it be funny if he or she--or whoever has it now--"converted" it to an upright commuter or tourer?