My Morning Commute: Only In 1984. Only From Cannondale.

On my way to work today, I saw only one other cyclist.  I wasn't surprised because this morning was the coldest we've had since February.  And it was windy, which I really noticed when crossing the RFK Bridge.

That cyclist, though, was riding a bike older than he is.  That, in itself, is not so unusual, as I often see people--particularly the young--on machines passed on to them by parents or older siblings, or found in basements, garages, barns or yard sales.

Some of those bikes could fetch money on eBay as "vintage" items.  In a way, that's very funny to me, because I remember when they were the sorts of things you'd see every day.  Most were good for the sorts of rides and riders they were designed for, but we never thought they were exceptional in any way.

But the rider I saw today was pedaling a rig that was unusual when it was made--and simply strange today: 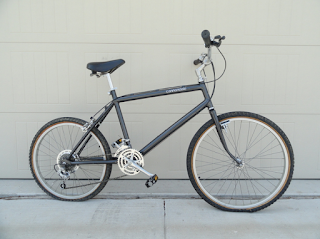 Cannondale made its first mountain bike in 1984.  It's the one in the photo above--and the one ridden by the fellow I saw today.  Unfortunately, I didn't get to take a photo of the bike.  But, from my brief glimpse of it, I don't think it had been ridden very much.

When that bike was made, mountain bikes were still new to most people who didn't live in northern California or, perhaps, upper New England.  It seems that those who were involved in the then-evolving sport of mountain biking hadn't developed any notions about what mountain bikes were "supposed" to be.

At least, their notions seemed fluid compared to those of us who were road bikers, even those as young as I was:  While the designs of certain components had evolved and refined, a good road racing, touring or sport-touring bike had more or less the same design and elements (lugged steel frames with a certain range of geometries) they'd had for about two or three generations before us.

On the other hand, the first mass-marketed mountain bike--the Specialized Stumpjumper-- began production only three years earlier.  Its design was a kind of cross-breed of the custom mountain bikes Tom Ritchey, Gary Fisher and a few other pioneers had been making for about half a decade.  Although the first shipment of 125 Stumpjumpers (built in Japan) sold out in six days and subsequent runs sold even more quickly, the Stumpjumper would not set the standard for mountain-bike design--at least, not for very long.

The truth was that even folks like Ritchey, Fisher and Chris Chance were still figuring out how to design their bikes, which had begun with Schwinn cruisers retrofitted with multiple gears and caliper brakes.  By the time the Stumpjumper came along, they and folks like Charlie Kelly were building lugged or fillet-brazed frames of chrome-moly tubing with long wheelbases--which, really, were lighter (yet stronger) versions of the old cruisers.

According to the information I've come across, all of the early mountain bike frames--including that of the Stumpjumper--were built from steel.  That is no surprise when you consider that about 99 percent of bikes were still being fabricated from that material. The only difference was that the lighter, more expensive bikes used alloy steels--maganese molybdenum (Reynolds 531) or chrome molybdenum (Columbus and Tange), while cheaper, heavier bikes used carbon steel.

Although bikes were made from it as early as the 1890s, aluminum was little-used as a frame material until the mid-1970s, when the "screwed and glued" Alan frames were built.  A few years later, Gary Klein designed an aluminum frame with wide-diameter tubing to make it stiffer.  In 1982--the year after the Stumpjumper first saw the light of day--Cannondale made the first mass-produced aluminum bicycles.

Those first Cannondales were road bicycles--racing, touring and sport models.  If you rode one of those early Cannondales, as I did, you know that their design has changed quite a bit.  So, I think it's fair to say that if Cannondale was still figuring out how to make aluminum road bikes, they were really starting from "square one" with that first mountain bike.  But it's also fair to say that no one else knew how to design aluminum mountain bikes, for--at least, from the information I've gathered--no one else, not even Klein, was building them at that time.

For all I know, the fellow I saw today on an early Cannondale mountain bike may have no idea about the history I've just described.  He probably just knows that he's riding a funny-looking bike.  Maybe he doesn't care.

Still, I can't help but to wonder who came up with the idea of designing a bike around a 24 inch rear wheel with a 26 inch front. As fluid as ideas about mountain bikes were at that time,  Cannondale was probably the only bike maker that could get away with doing such a thing.  And 1984 was probably the only year they could have done it.