Even as a writer, writing for so many years, I still sometimes find it odd that I have relationships with people that are formed entirely by words.  I even find it a bit unusual that I can have a connection with someone through images as well as words.

Well, two weeks ago, I finally came face to face with someone whose blog I've been reading for years--in its iterations on Blogspot as well as Word Press--and with whom I've corresponded by e-mail and post cards.  That last part is particularly interesting, as he created some of the cards himself. 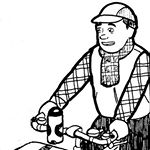 I am referring to Shawn Granton, the author/artist of Urban Adventure League and the eponymous organization dedicated to human-powered explorations of the urban environment.  "Human-powered", of course, encompasses a number of modes, including feet and public transport, though Shawn's primary--and favored--means of travel seems to be the bicycle.

After work, I hopped on my bike and pedaled down to Oren's Daily Roast, a couple of blocks from the Metropolitan Museum. (Oren's costs a bit more than Starbucks but is worth it, both for the coffee and the relatively intimate atmosphere.)  We didn't have much time together, as he was trying to fit visits to a number of friends and relatives across several cities and states into a weeklong East Coast trip.  The time, however, was satisfying, as I felt no need for preambles.  Though I had never before seen his face, I felt that I already knew him at least somewhat, and that it felt a bit more like a reunion, however brief, of old buddies rather than an introduction.  That may be as much a testament to Shawn's easygoing personality as it is to anything else. 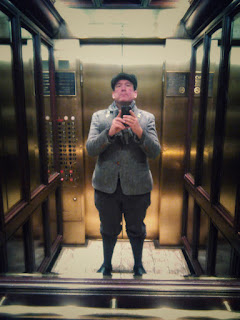 I wish only that we could have ridden together.  Perhaps another time...when he comes here again...or when I go to Portland?