There was a time when a robbery or burglary seemed to be a rite of passage for an urban bike shop in the US.

I can say, without being hyperbolic, that every New York shop in which I worked or bought anything from the late '70's to the early '90's was victimized by crooks.  Sometimes the perp walked in and demanded whatever cash was on hand, and whoever happened to be at the counter would hand it over.  Other times, a thief would flee with a bike or two or whatever parts or accessories he or she could carry.

In one of the shops in which I worked, the robbers actually tied up the owner and employees in the basement and made off with expensive bikes and parts. (Fortunately for me, I wasn't working that day!)  Other shops experienced similar crimes. More than one such incident ended tragically:  In particular, I recall that a robbery in Frenchie's Cycle World, a favorite of Brooklyn cyclists, ended in a gunfight that left a robber and a police officer dead.

(The robber killed in Frenchie's was a 30-year-old man.  He persuaded his two teenage nephews and teenage friend to help him.  They were captured thanks to a ruse by one of the shop's employees.)

And then there were burglaries like the ones  that finally drove Tom Avenia out of New York City. From what I heard--whether from Tom himself or others, I forget--his windows, doors and gates were all broken or ripped out so that someone could have unpaid access to his Frejus, Legnano and other Italian bikes, as well as Campagnolo equipment.  Then, one night--again, this is an account I've heard--some thief or thieves actually cut a hole in the roof of his store and helped themselves to much of his merchandise.

I was reminded of Tom, Frenchie's and the other thefts I've mentioned when I heard about what happened in San Francisco the other night.

Box Dog Bikes is a worker-owned shop in the city's Mission district.  In the wee hours of yesterday morning, Geoffrey Colburn, one of the owners, got a call from the police department after they were called by a neighbor. 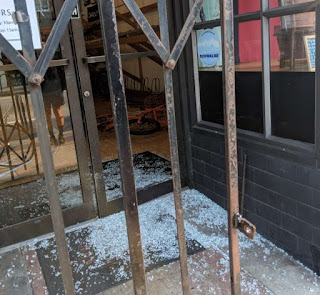 What he and the cops found were a hole--just big enough to squeeze bikes through--in the metal gate, and a shattered tempered-glass window behind it.  Inside: empty bike racks. 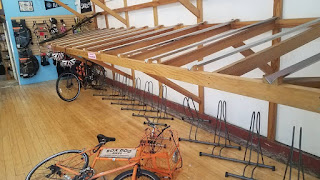 In all, 21 bikes--most of the shop's inventory--were taken.  They were all listed on the shop's Instagram account.  Included is a plea to call 911 for anyone who sees the bikes, along with an admonition not to fight anyone who has the bikes.  "Most of these bikes don't have pedals, so it's gonna be hard to ride them."

If that doesn't stop the thieves, I hope something else will.