Which Do You Lock First?

During my recent trip to Cambodia and Laos, I saw some heartbreaking poverty.  Still, there seemed to be little or no theft:  People left all sorts of items, including bicycles, out in the open, unsecured.

And, as in other parts of the world, people leave their shoes at the door before entering their homes or, sometimes, even places of work or business.  That makes sense when so many streets, even in the middle of a city like Siem Reap, are wholly or partially dirt--which, of course, becomes mud when it rains--and dogs, cats and sometimes other animals roam freely on them.

Still, I had to wonder whether anyone had ever lost his or her shoes after leaving them by the door. (That didn't stop me, though, from following the local custom.)  Or a bicycle, for that matter. 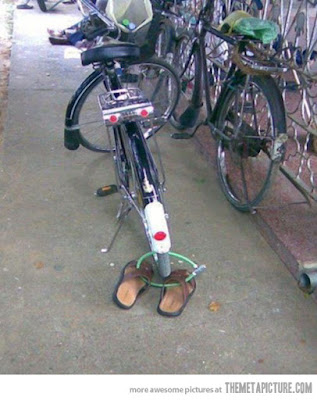 This photo wasn't taken in any place I visited, as far as I know.  Having seen it, though, I have to wonder:  Is there a place where you're more likely to have your shoes than your bike stolen?
at August 26, 2018