More Than Green Paint In Beantown

In which American city do motorists spend the most time in bumper-to-bumper traffic?

Hint:  It's not New York.  Or Los Angeles.  Or any other city in California.  And it's not Chicago or Detroit, either.

That distinction goes to Boston.  Residents of Beantown wouldn't be surprised:  After all, their city has long had a reputation for having some of the worst traffic in the United States.

It's such that fellow New Yorkers are amazed when I tell them I've cycled in Boston.  More than one Big Apple cyclist has told me he or she would never, ever ride in the New England hub. "Those drivers are crazy!," they exclaim.

My response is usually along the lines of, "Well, yes, you do have to exercise caution, just like you would in any other city."

One thing I have to say about Boston cyclists, though:  They have grown very sophisticated about cycling infrastructure.  No longer are they satisfied with the "green paint on the side of the road" approach to bike lanes. 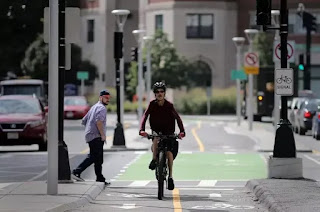 Now Causeway Street, a major connection between the North and West Ends (and, until 2004, the site of one of the city's main elevated train lines), has a bike lane running down its center, separated from the east- and west-bound traffic lanes by concrete barriers.  This could be very important to commuters and recreational cyclists alike, as it links to the Connect Historic Boston bike path and ends with the New England Aquarium. 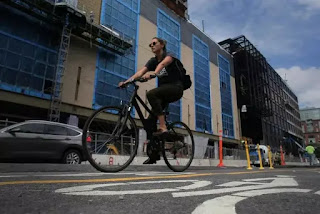 Also, the upcoming redesign of Commonwealth Avenue near Boston University will include bike lanes built into wide sidewalks and separated from cars:  an arrangement common in Europe.  The redesign will also eliminate a flaw such lanes have in other American locales:  At intersections, concrete platforms will be built between the bike path and auto lanes.  This is intended to force drivers to take slower, wider right turns. 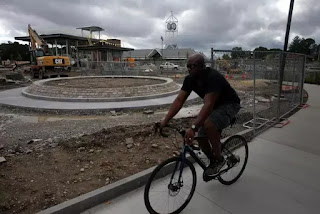 Speaking of turns: The city's first bike rotary is under construction at a point (near the MBTA Forest Hills station) where new bike paths intersect with the city's Southwest Corridor path.  As Boston Globe reporter Adam Vaccaro wryly notes, it remains to be seen whether cyclists behave better in their rotaries than motorists do in theirs.  (That sounds like something a Bostonian would say.)

And, for traffic management, traffic signals for cyclists are also under construction.  I've seen a few here in New York.  In theory, they are a good idea, especially where bike lanes intersect with major roadways.  One problem I've seen is on the lane I often use when commuting to work:  It's a two-way lane for cyclists, but the street that runs alongside it is a one-way.  This creates problems when you are cycling in the opposite direction from the traffic:  The bike signal isn't always in sync with the cars, many of which are coming off the nearby expressway.  I hope the Boston planners are mindful of such things.

So far, it all sounds pretty ambitious and forward-thinking.  I am very interested to see how the new lanes, barriers and signals work.