Trying To Clear The Air

According to the World Health Organization, the cities with the world's worst air quality are clustered, with a few exceptions, in three areas:  India/Pakistan, China and the Middle East.

What most of the cities on WHO's list have in common is rapidly-developing economies, mainly in manufacturing and other highly-polluting industries.  However, one of the reasons why so many Chinese and Indian cities make the list is, ironically, the opposite of a reason why Middle Eastern urban areas are found on that same list.

That reason has to do with petroleum.  Countries like Saudi Arabia and Iran have lots of it, and use it.  On the other hand, while India and China are also petrol producers, they have also become importers because their industries and vehicular traffic have grown so much, and because their current oil reserves are more difficult to tap than the ones that have previously been tapped.  Plus, both countries are rich in coal, which is widely used as fuel as well as in making steel, a major export for both countries.

But it seems that even in parts of the oil-rich Middle East, there is some awareness of the perils of petrol dependency.  Some of them are, of course, economic:  What will they do when the oil runs out, or simply becomes too difficult or expensive to extract from the ground--or, for that matter, if demand for it decreases?  Other hazards of fossil-fuel addiction include--you guessed it--health hazards related to poor air quality.

So, perhaps, it is not surprising that the Netherlands Bicycle Partnership, a consortium of public and private organizations working with the University of Amsterdam, is working to encourage cycling in Tehran, the capital of Iran, as well as other cities (which made the WHO list) in the country. 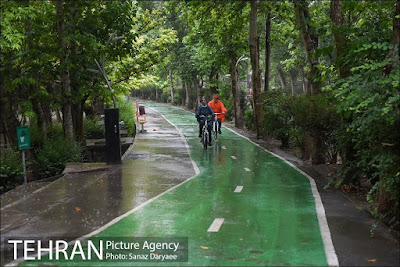 The NBP, formed in 2015, works with local governments and organizations on sustainability issues.  It recently helped to devise a document designed to encourage cycling in the Iranian capital over the next five years.  The city is starting to take the steps necessary to develop the infrastructure and do the other things needed to meet the goals of the document.  This is significant because previous attempts to promote cycling failed, in part, due to the lack of said infrastructure--including bike lanes and ride-sharing programs.

It would be interesting--and gratifying--if an area with an economy so tied to petrol production can develop the sort of bicycle infrastructure--which, one imagines, could encourage bicycle commuting as well as recreational cycling--found in petrol-poor countries like the Netherlands, which has significantly better air quality in its cities. 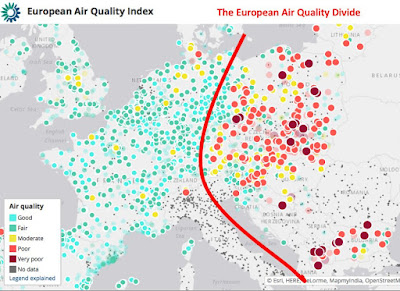 (Interesting side-note: In Europe, the west generally has better air quality than the east--and the differences are stark.  In fact, there's a clear line between the two, and it roughly follows the old Iron Curtain.)