Not In Hamilton's Backyard!

Nobody likes seeing broken-down cars or trucks rusting away in someone's front yard.  Part of the reason, of course, is that it's unsightly and can be a health hazard.  But I think it also has to do with the perception that anyone who keeps the rotting hulks of motor vehicles next to his or her house is low-class.  Some people, I'm sure, associate decaying station wagons and vans with trailers rather than solid middle-class homes.

I think most people would be even more surprised to see such waste next to a brownstone in a fashionable part of the city.  Certainly, almost nobody expects to see something like this: 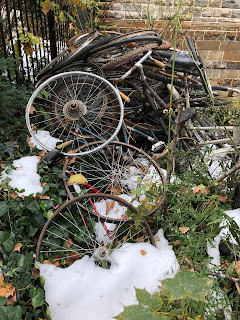 in front of a landmarked brownstone in a designated historic district.  But I saw that pile of bikes and parts in front of such a house in Hamilton Heights, just two blocks away from the house once owned by the man for whom the district--and a popular Broadway musical--are named. 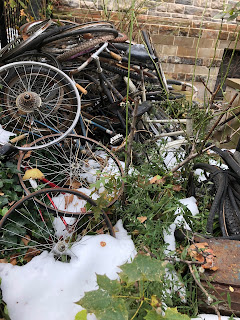 I would love to know the story of how all of those bikes and parts ended up there.
at November 19, 2018