In another era--or was it another life?--I wrote for small-town and community newspapers.  In that role, I looked at police reports and blotters. It's a vice in which I still indulge, occasionally.

Sometimes those reports make me laugh.  How else could I react upon reading something like "a caller reported a man yelling and swearing on Street X"?

Then again, I'm from New York, where one of the first things you learn is not to leave anything in your car, or cart! 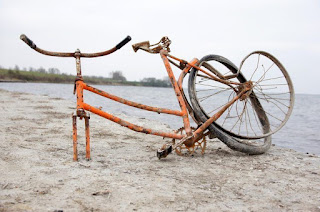 Perhaps my Big Apple-induced jadedness extends even further than I thought.  In the Wisconsin Rapids Tribune, the police blotter reported that a caller complained about "kids on bicycles who kept on going into dumpsters." (Someone called the cops for that?)  But my favorite item is this:  "A Wisconsin Rapids man reported someone stole his child's bicycle...and then brought it back destroyed."

Hmm...Taking something from someone and giving it back destroyed.  For a moment, I thought, "That's what my country did to Iraq."

(Also check this out.)