Where Did You Leave Your Bike?

When I go to work, I park my bike on the rack in the college's parking lot.  There, a Peugeot mixte from around 1985 has been parked for at least a couple of years.  I can so date the bike because it's the same model I gave my mother:  a basic carbon-steel frame painted burgundy with yellow and orange graphics, equipped with European components except for the Shimano derailleurs and shifters.

At least one security guard has asked me whether I know who owns that bike.  I don't:  It was just there one day, and has been there ever since.  In the meantime, the chain has turned nearly as orange as the graphics, and other parts are tarnishing or rusting.  The paint still looks pretty good, though, which means that the bike probably wasn't ridden much before it was parked on that rack.

Campus security personnel want to clip the lock and give the bike to a charity or someone in need.  But, as one officer said, "The day after we get rid of it, its owner will show up."

So the owner of that bike remains a mystery. Perhaps she (or he) rode in one day, had some sort of emergency and never returned.  Or perhaps s/he decided that one ride was enough and simply abandoned the bike.

We've all seen bikes like that chained to trees, signposts or other objects for what seem like geological ages.  Once, I went with my parents to the Post Exchange (PX) at Fort Monmouth, New Jersey, when my father was a reservist.  I saw a nice Fuji--an S10S, I think--chained to a pole seemingly since that base opened.  A soldier noticed that I was eyeing the bike. He said "the guy", meaning the bike's owner, probably "shipped out."  In the military, they can tell you to go to the other end of the world literally on a moment's notice, he said.

How many "orphan" bikes are there?  What are the stories of the people who left them behind?

Those questions have been asked for years about a bicycle on Vashon Island, Washington, about 15 minutes from Seattle.  This bicycle, though, isn't locked to a tree:  It's in the tree. 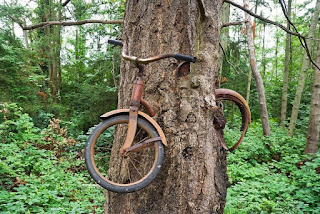 Not surprisingly, a few legends have grown about, and claims have been made for, it.  In the latter category is the claim made by Don Puz, who grew up on the island.  When he was a child, his family's house burned down.  Donations to the family included a bicycle, which was too small for Don and had hard rubber tires.  He says that one day in 1954, he rode his bike into the woods where he met some friends.  They weren't riding bikes, so he walked home with them, leaving the bike in the woods.  He simply "forgot" about it, he says, until it showed up on Facebook.

Which brings us to the legends--one of them, anyway.  According to the Facebook posting, "A boy went to war in 1914 and left his bike chained to a tree.  He never came home."

That myth isn't hard to refute:  It's very unlikely that a  boy small enough to ride that bike would have gone to war. Also, if he was American, he probably wouldn't have gone to war in 1914, as the US didn't enter World War I until 1917.

As for Don Puz's claim, it's plausible if one question can be answered:  How did the bike end up as part of that tree?  Hmm..Dear readers, are any of you dendrologists?