In The Beginning (Of The Season)

It may not officially be Spring.  Not yet, anyway.  But even with the mild weather we've had yesterday and today, it feels like the beginning of spring.

Or, could it be that riding just felt so good?  Yestersday I took one of the first seashore rides I've done in a while.  One thing about such a ride early in the spring (or on a mild day at the end of winter) is that you know that you're approaching the water because it's noticeably colder.  You see, even though the temperature neared 60F yesterday and 70F today, I don't think the ocean temperature has reached 40F yet.  So, a maritime breeze--let alone a wind--will let you know that you've underdressed, even if the sun feels good on your skin.

But the real essence of a first-of-spring ride is, for me, the feeling of emerging from a cocoon or a shell.  Of course, that might mean an ache or two if I ride a little harder or longer than I'd ridden during the winter.  But, still, it's an energetic feeling--or, more precisely, one of emergence, like a flower groping its way up from the barren earth.

In the spirit of the first of spring, I want to pay homage to someone who's been an inspiration to me over the past couple of years.  In that spirit, here is a "first ride of spring" photo from one of my favorite bloggers: 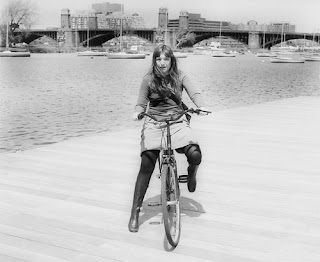 Velouria, I mean no disrespect or condescension when I say that this photo of you made me think, not only of the first of spring, but of evolution.  After all, according to Darwin's theory (and Genesis, for that matter), all life began in the sea.  So, in a real sense, cycling begins in the sea, or at the water's edge, at any rate.
As it happens, her blog--Lovely Bicycle!--began in the Spring three years ago.  Coincidence?