I'd been cycling about a decade when the issue of helmet-wearing became, as Cardinal Dolan might say, one of the "settled questions" of the cycling world.  By that time, even old-timers who'd been cycling--and, in some cases, wearing "leather hairnets"-- before I was born were wearing the "tortoise shells" that Bell and a couple of other companies made.

I started thinking about those days when I saw this photo: 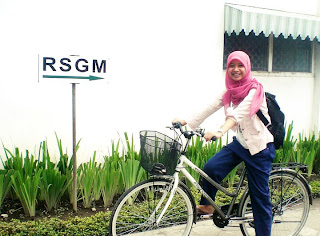 We all know that the lovely young lady would be safer in a helmet.  But she certainly wouldn't look any better.  In fact, this might be one of the few times in my life that I speak in favor head scarves.
Hmm...I don't know anything about Sharia law, so I don't know whether she could wear a helmet over her scarf.  Now I'm thinking about a guy with whom I used to train. He wore a helmet over his yarmulke; when I was "drafting" him, I could see the fringes of his tallit dangling below the hem of his jersey.
I wouldn't see anything wrong witht that young lady wearing a helmet, as long as its color doesn't clash with that of her scarf.  I don't know whether the imams would share my opinion, though.
at March 01, 2012