Nina: A Nice Person In A Nice Bike Shop

You've probably seen the following in your favorite bike shop:

There are other kinds of people you meet in bike shops.  But, based on my experience in working in shops and having visited many others, the people I've mentioned are the one who seem to be found in just about any shop.
Today, I met someone who doesn't fit any of the above categories.  I stopped in the shop--James Vincent Bicycles of North Bergen, NJ --in the middle of today's ride.  The shop has been in business for 75 years and, even though it carries "serious" racing and mountain bikes from the likes of Cannondale, Trek and Giant, it attracts a lot of people from the immediate neighborhood, sometimes for non-bike-related issues.
The young woman I met today is one of those neighborhood denizens.  Actually, her father was there for a non-bike issue, and she accompanied him.
But she wasn't one of those bored and resentful family members who doesn't share her relative's enthusiasm for cycling.  In fact, she was on the same kind of wheels as her father rode: 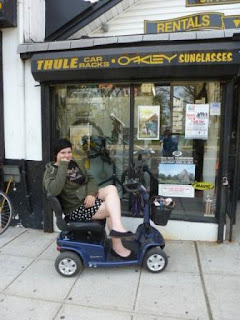 Nina could get around perfectly well without that cart.  But her father couldn't:  He had no legs.  He'd gone to the shop to have something in the chasis tightened:  He could feel it coming loose, and it would've taken only a decent-sized hole or crack in the sidewalk or pavement to immobilize him.


I only got to talk with Nina briefly.  She seemed like a very nice and intelligent young woman.  I'm guessing that she rode her cart to the shop so that her father would have it in case he needed to leave his at the shop.  Even if that's the case, she's doing a great thing in helping him and experiencing, however briefly, the world as her father does.


I rode behind them for a few blocks until they turned.  I continued down the Jersey side of the Hudson River to the Bayonne Bridge, and through Staten Island to the Ferry.  I'm not religious, but I can say I felt blessed:  two good legs, a great bike, a beautiful day and an interesting ride.