Imagine getting started in cycling (or just about anything else) without the Internet.

Well, if you're of my generation, you don't have to remember.  You relied on books and magazines--and your local club (if you had one) and bike shop.

I was reminded of this when I came across a page that archives some old articles from Bicycling magazine.

I thought about the bikes I learned about--and, in most cases, never actually saw--while reading the magazine.  Their names alone were journeys into places I had yet to visit and times I would never see.   I mean, when you thought the choices in bikes were among three-speeds, Columbias, Murrays and Schwinns, names like Hetchins, Routens, Jack Taylor, De Rosa, Alex Singer, Mercian, Pogliaghi and Rene Herse seem other-worldly.


And, of course, there was no way I could have afforded those bikes.  All I could do was to save those copies of Bicycling and read about them--and look at the photos.

To this day, I haven't seen some of those bikes.  One I'd really love to encounter is the Rene Herse Demountable.

Yes, it's a folding bike.  The mechanisms used to collapse were found on the down tube 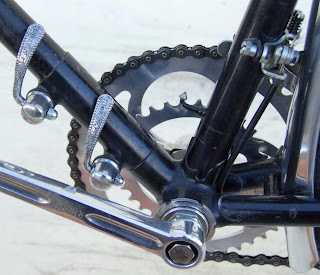 and the top tube 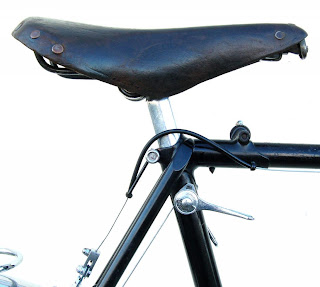 Note the placement of the shift levers!


The Bicycling article makes folding the bike seem easy.  I wonder just how easy it--or, for that matter, transporting it--actually was.  If nothing else, I'm sure it was a better ride than just about any other folding bike ever made.


The demontable I'd really like to see is this women's model.


I can only imagine what some Japanese collector would pay for it.