Saturday Sillies: What If Charlton Heston Had Ridden A Bicycle In "The Ten Commandments"?

I have always known that we, as cyclists, can change the world around us.

We all know about the ecological effects:  If we get to work or school, or take joyrides, on our bikes, we don’t use the gasoline and other resources used by, or cause the pollution made by, automobiles.  We also know about the health benefits:  The exercise of pedaling makes our bodies stronger and the emotional release of being on a bike makes us saner. (Notice that I used the comparative rather than the absolute form of the word “sane”.)


I believe many of you also know that we can also be agents of peace.  Although we can be competitive with each other and get angry with motorists who cut us off or pedestrians who step into our paths while they’re texting someone, for the most part, we’re calmer than most other people.  That, I believe, has to influence the people around us in one way or another.


That got me to thinking about how my riding, or cycling generally, might have influenced the drivers of these vehicles I encountered on my ride today: 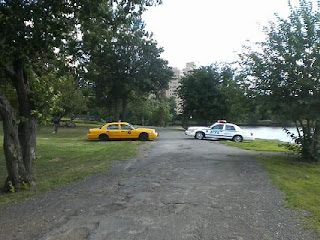 Did I have the kind of influence Charlton Hestonhad in The Ten Commandments?  Am I such a powerful cyclist that I can cause two cars to part and let me pass?


Or, could it be that the police officer and taxi driver were so in awe of a woman in late middle age riding her bike—and passing a guy half her age—that they stopped dead?


Hmm…Maybe they, in the tedium and stress of their jobs, they were simply seeing so struck by seeing someone happy—positively giddy, like a lovestruck teenaged girl—that they simply had to stop?


And, dear reader, I’m still feeling giddy.  I’m not sure of why:  The ride, while pleasant and invigorating, was not exceptional.  I did nothing exceptional before or after the ride and I ate foods that, while both healthy and tasty, had no mind-altering chemicals of which I’m aware.


If you’re giddy, how can you not change the world around you—or, at least, some part or some people in it?


(As I type this, the Beatles’ Hey Jude is playing on the radio. Somehow that seems exactly right.)