I've never had a tatoo, and I probably never will have one. Every once in a while, I see one I like.  However, even seeing such a tatoo has never made me want one.

It's not that I have any religious or philosophical objection to tatoos.  Nor am I afraid of the needles, at least not anymore:  After all, I have had surgery.  And, even though I grew up in a time when tatoos were associated with outlaw bikers, prisoners and the sorts of military folk who live, work and die by the motto Caedite eos.  Novit enim Dominus qui sunt eius, I have never had any fear of, or prejudice against those who have their bodies pricked and painted.  Perhaps my attitude is a result of having two uncles--one of whom is my godfather--with tatoos.

Even when I see a tatoo I like on someone else, I have no wish to get one for myself.  Perhaps it's hypocritical, but I find myself thinking, "Good for him (or her)."

I feel something similar about some of the wild bike finishes and color schemes I see.  I saw an example parked near Columbus Circle today: 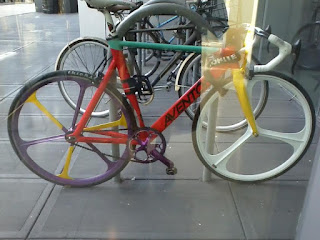 I had to go inside a Starbuck's to take the photo because the bike was parked too close to the glass wall for me to take a photo from the outside. Believe it or not, I actually liked the look:  In some strange way, those colors and shapes actually work together.

Still, I would never make any of my own bikes look anything like that.  And I definitely would not put wheels like those on any bike of mine.  But if that bike makes its owner happy, that's what matters.  Right?
at August 26, 2015